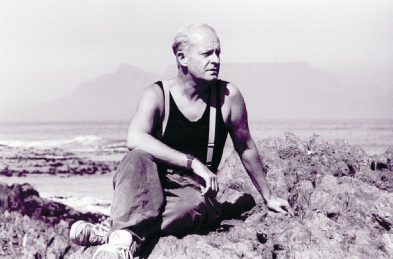 IN SOUTH AFRICA, SOMETIMES THE SOUND OF LAUGHTER

JOHANNESBURG — FOR all the efforts of its official publicists, the impression of itself that South Africa conveys to the world is compounded of fear, suffering and, above all, conflict. It might seem to follow that the South African scene is bleak and joyless. Often it is, but sometimes, especially when the Market Theater here is going full force, it can be vibrant with life and more than a little hilarious.

The Market is a complex of variously sized theatrical spaces and galleries, occupying a section of the old wholesale produce market, a vast structure of brick, polished woods and nicely wrought iron that was erected during World War I on the scale of a London railway terminus. Located just beyond the financial district in an area whose other conspicuous buildings include the security police headquarters and the courts where blacks are daily sentenced by the hundreds for being illegally in areas decreed to be ''white,'' the Market Theater operates as if it had some kind of extraterritorial status, making it immune to the country's racial and censorship laws.

It started off five years ago, with a production of Chekhov and an idea that it could evolve along the lines of Joseph Papp's Public Theater in New York. Since then, under the artistic direction of Barney Simon, a writer who has been involved in creative endeavors across the color line for the better part of two decades, The Market has increasingly found its own South African accent, or rather, accents.

The Market is brimming over with energy — much of it wickedly satiric — and on any given night now its accents come in four languages: Afrikaans, English, Zulu and Sotho. Its five concurrent productions attract mixed audiences, with the mixture different at each one.

There are unlikely to be any blacks or whites of English origin at the first Afrikaans translation ever staged of a play by Athol Fugard, South Africa's major dramatist, who writes in English but often of characters of identifiably Afrikaner origins. The author is partly of Afrikaner origins himself and the play, ''Hello and Goodbye,'' is at once the most personal and Afrikaans of his works.

The audience it attracts is predominantly Afrikaner but not exclusively white; the other evening, at least, there was a sprinkling of Afrikaans-speaking coloreds, as persons of mixed race are called.

On the other hand, not many Afrikaners turn up for ''Woza Albert,'' a stunningly original revue with a two-man cast that manages all at once, through a rapid-fire sequence of vignettes of devastating accuracy and wit, to turn the black experience in South Africa into music, mime, satire, slapstick and, ultimately, a triumph over adversity that can only be described as a celebration.

There are banners up to advertise ''Woza Albert'' in Soweto — Johannesburg's black township, which has a population that exceeds the white areas of the city — and on some nights there are as many blacks in the audience as whites. Those are the best nights, for the blacks have a surer sense of when to laugh and their laughter carries along the whites who enter the small theater with a visible, sometimes audible self-consciousness. ''We'll sit in the first row and get abused,'' one white man said to his friends the other evening in a tone that didn't quite manage to sound lighthearted.

''Woza Albert'' was conceived and created by its performers, Mbongeni Ngema and Percy Mtwa, and then, at their insistence, shaped and directed by Mr. Simon, who has directed numerous black productions at the Market. The two actors appear on stage barechested in sweatpants and running shoes, which they augment with only a handful of props such as hats, eyeglasses and bulbous rubber noses that they wear when they are impersonating a menacing white police officer, a chirpy television newscaster or Prime Minister P.W. Botha, who appears twice to comment on the central action of what might loosely be called the plot — that is, the coming to South Africa of Jesus Christ, who is always designated ''Morena,'' a Sotho word for Lord.

On his first appearance, the Prime Minister is understandably proud that the Savior, as he puts it, ''chose us.'' But then, when Morena leads an invasion of black women from the black ''homelands'' to the white cities where their husbands and sons must now come alone as migratory laborers, the Prime Minister returns to denounce him as an imposter and a ''cheap Communist magician.''

Winds Up in Prison

Inevitably, Jesus ends up on Robben Island, the Alcatraz-like prison off Cape Town where some of South Africa's most important black leaders are jailed. There a prisoner pleads with him to make a miracle, so he walks across the water to the mainland, only to be attacked with missiles. In the final scene, he is awaiting his resurrection in a cemetery where he is induced to call back from the dead an honor roll of black leaders that starts with Albert Luthuli, the late leader of the outlawed African National Congress and Nobel Peace Prize Laureate. It is only then that the production's name is explained. ''Woza'' means ''rise up.''

It is astonishing to realize that while these two black actors are dancing their way through this triumphant climax, a cast of eight (six whites and two coloreds) is pouring a like amount of satiric energy into an Afrikaner cabaret just across the lobby to audiences made up almost entirely of Afrikaners who belong, of course, to the dominant white group. The name of this exceptionally polished and vigorous production is, in a loose translation, ''With Your Permission,'' which is what would be said in polite Afrikaans before uttering something that might be taken as excessively blunt.

''With Your Permission'' originated with some self-conscious attention to Brechtian models in the drama department of Stellenbosch University, but the result is anything but academic, especially when the female dancers, all whites and shockingly deshabille by Afrikaner standards, move saucily and sinuously through a concluding number called ''Life Is a Border Hotel.'' The song's insinuations are mildly scandalous by local standards, for everyone knows that it's not only the casinos but sometimes also the possibilities of sex across the color line that lure South African whites to hotels in black states that are inside or adjacent to this country. Songs in Counterpoint

In another number, the cast sings a snatch from an Afrikaans patriotic hymn in counterpoint to the anthem of the banned black nationalist movements. There is verve in the performance and also an implication, in the way the lyric of the hymn is reworked, of the downfall of Afrikaner power. The musical analogies are to Kurt Weill's Berlin and they don't seem unconscious.

But for sheer naughtiness, no one is more flagrant than Pieter Dirk Uys, a humorist, playwright, actor and female impersonator of Afrikaner origins, who is performing every night at the Market in a one-man revue largely timed to coincide with the general election that was held for whites only on yesterday. Uys comes on in drag as Evita Bezuidenhout, the wife of a Member of Parliament in the governing National Party.

Just in case anyone misses the allusion to another Evita, she says in a stagey aside, ''Do not forget me, oh Rustenburg.'' that reference is to a notoriously conservative town in the Western Transvaal.

Uys also impersonates the Prime Minister and the Foreign Minister — he has a patent on both roles — as well as an affluent liberal hostess who exclaims wearily, ''There are two things we can't stand about South Africa -apartheid and the blacks.''

The fifth production running at the Market is another one-man revue. It features Jeremy Taylor, who was the main spirit behind a South African revue called ''Wait a Minim'' that ran successfully in London and on Broadway in the mid-1960's. Mr. Taylor seemed daring then. By today's standards, he is merely engaging.

Asked to account for this burst of satiric and theatrical energy, Barney Simon speculated that the irreverence grows out of desperation, which comes in turn from a recognition that South African reality refutes the official theories of how things are supposed to be.

''What I'm trying to say is that there's something happening that's causing cracks,'' he said. At the same time, it's creating room, he believes, for a ''multilingual theater'' that can project the voices of the real world, even when there's little possibility of their sounding in unison.