Pieter-Dirk Uys’ newest side-splitting attack on the status quo, Fee-Fa-Fo-Fum, is running now at Evita se Perron in Darling, a picturesque town about an hour’s drive on the R27 from Cape Town. As is customary with Uys, one of South Africa’s most celebrated playwrights, satirists and performers, no ego is spared — not even his own — as he stages a number of carefully crafted characters in his pursuit of honesty about the state of South Africa. Fee-Fa-Fo-Fum is another outstanding, hard-hitting but vastly entertaining production from an iconic theatre maker.

Uys is not a sentimental man and therein lies the potency of his performance. He’s been commenting on the political and social landscape of South Africa for more than 30 years and it’s a testament to his tenacity and the accuracy of his observations that he still pulls sold-out crowds here and abroad.

In Fee-Fa-Fo-Fum, FIFA boss Sepp Blatter is Uys’ first victim. This incarnation of Blatter comes equipped with a heavy German accent, a grotesque prosthetic nose and a scandalous Nazi salute. “We never realised we could make so much money on a bankrupt continent!” Uys yells, impersonating Blatter.

Beyond the 2010 FIFA World Cup™, Uys has a remarkable ability to weave all the social-political concerns of modern South Africa — violence, sex, corruption, HIV/AIDS, politics, identity, exile and immigration, the lasting legacy of apartheid — into his shows through a wide variety of characters that all have their individual concerns.

There’s Nowell Fine, an ageing Jewish woman whose children have all left the country and who has recently adopted a black South African orphan; the “true English soccer hooligan” who threatens to stay in South Africa once the football tournament ends (heaven forbid!); Pik Botha, an apartheid-era Minister of Foreign Affairs who will do anything — even apologise for apartheid — to get a ticket to the final match of the 2010 FIFA World Cup™; Evita Bezuidenhout, the most famous white woman in South Africa; and Bambi Kellerman, Evita’s HIV-positive, exotic-dancing sister.

Uys becomes these characters simply by turning his back to the audience for just a second while changing one or two aspects of his costume. This on-stage metamorphosis speaks not only of Uys’ long-standing stage prowess, but also serves to show that there is method behind stage magic, making his observations all the more relatable. His insights hit home every time.

Going to the theatre at Evita se Perron is made all the more sweet by the peripheral experience. No visit is complete without an amble through Uys’ Boerassic Park and the Museum/Nauseum. Both pay homage, with irony in spadefuls, to the old South Africa. You’ll also do well to have lunch or dinner there – recipes are proudly South African and many are taken from Uys’ recently launched recipe book, Evita Bezuidenhout se Kossie Sikelela. 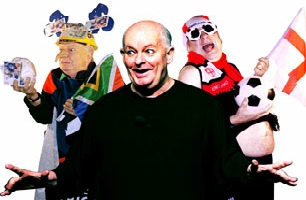