The End Is Naai

PD Uys at his satirical best

South African satirist Pieter-Dirk Uys may be best known for his beloved drag character Evita Bezuidenhout, the buxom, big-haired matron with a penchant for politics who, over the years, has managed to get away with some pretty scathing commentary on cabinet ministers and other controversial figures, not to mention burning issues like HIV/Aids and the arms deal. But after a few artful changes under the full glare of the footlights, he's also a dead ringer for the likes of the country's dreaded apartheid era prime minister, P.W. Botha (eliciting yelps and catcalls from a hysterical audience) and reluctant side-kick Pik, Winnie Mandela, Kader Asmal and a host of other political figures we both love and loathe.

Uys reminds us why he's this country's hottest property both on an artistic and social awareness level, as while he's up there on the stage flitting from costume to costume and clearly revelling in the business of showmanship, his feet are firmly planted on the ground about some pretty serious stuff happening in our midst. And even as we laugh till we feel we're about to burst at his razor sharp wit and brilliantly timed lines, it's like he's jammed our heads — and hearts — with a wad of mental post-it notes. Don't forget the injustices of the past, or the present, and for God's sake, don't let them be repeated in the future. And he doesn't only make us think — more importantly, he urges us to act.

Specifically in his latest one-man satire, 'The End Is Naai', the action he urges us to take is to vote, pertinent since it's election year, with the big date with the ballot box literally around the corner.

The show premiered at the Spier Arts Summer Season on March 17 to an almost riotously appreciative audience. A quick scan of the open-air amphitheatre didn't reveal any attending cabinet ministers or opposition party leaders, which was probably just as well, though they could well have been lurking in the shadows. In fact, Uys kicked off his pacy hour-or-so long show with the "surprise, surprise" news that just about every politician in the country was elsewhere in Africa or attending some or other convention or opening on far-off shores. It was thus that the capable Evita Bezuidenhout, once at the helm of the fictional Baphetikosweti homeland in the dark days of the eighties, had been asked to fill in the role of Acting President.

Of course, it was only fitting that the blousy, outspoken Tannie Evita kicked off things in her usual charming way, allowing her to get away with just short of actual murder. Thereafter, Uys took a journey through 10 years of democracy in South Africa, leaving not a single sacred cow in his wake.

After an entertaining session with "koffie-moffie" Brendan, who took us on a tour of our president's personal jet, we were presented with the "play within a play", 'Macbeki', featuring the rather un-delightful Three Witch sangomas of Voodoo Princess Nkozosana Zuma, Amazing Grace Mugabe and Manto the Naked Chef — indeed we got to gasp at the brazen spectacle of our Minister of Health dripping with a garland of vegetables and garlic, and menacingly wielding an African potato. Let me not even mention where this cultural weapon was headed...

But not all his personas were "baddies" — some, like Nelson Mandela and Archbishop Tutu, he holds in such high esteem you almost want to weep and jump up and yell, "Viva!", along with him. Some among the audience almost did, but that might have been because of the wine smuggled into the amphitheatre and the general buoyant mood of the show.

But Uys is never an ominous voice of gloom and doom, as there's a sense of optimism, even warmth, that underlines his every critique. 'The End is Naai' leaves you feeling damn proud to be South African, which probably has a lot to do with having the capacity to laugh at ourselves even as we prepare for what Uys deems the most important election of our country's history. See it if you can! 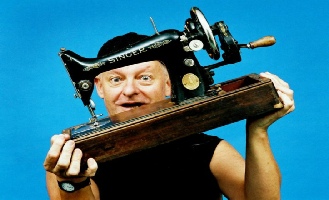