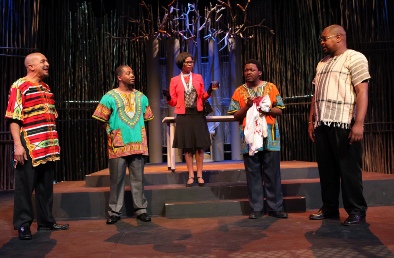 Reviews of MacBeki in Johannesburg  —  April 2009

****  MacBeki has to be [Uys'] most ambitious foray into the body politic yet. ...  a wily comedy, a political satire, a compelling tragedy, rolled into one.

Go and see this show as it will make you either angry or excited depending on which side you are on. No fence-sitting here.

Uys, takes his wit and humour to a new and truly fabulous level. ... MacBeki is satirical social commentary at its best.

The Comrades and William Shakespeare make unusual bedfellows. But this is what happens when a gifted playwright like Pieter-Dirk Uys sets his mind to re-writing one of The Bard’s most famous works with inspiration from members of the ruling party and other characters who happen to get in the way.This slice of lunacy, which provides audiences with moments of great hilarity and clever word interplay, makes for an engaging night at the theatre.

Uys’ magic begins to weave it own spell as the hilarious action unfolds and the various identifiable characters make their appearance.Described as a "transgressive variation" of "Macbeth," the play retains the elements of ambition, power, deceit and greed during its discourse, with the happy family of South African players contributing immeasurably as the farce unravels.

Structurally, "MacBeki" rests on the Shakespearean tragedy; its humour is sometimes cheap in its urbanity, sometimes cutting in its cruelty, brilliant in its bitterness. It’s a tale of Aids and its discontents, of this country’s crippling challenges: from xenophobia to misinformation and ministerial corruption, and one of unbridled lust for power, in its ugliest (and most pathetic) form. But this is a farce, not a tragedy, even if the underlying layers hit home with profundity more than the rolling heads and blood baths in other interpretations.

"MacBeki"  sparkles and fizzes with Uys’ particular satirical genius. This is the first theatrical rendering in 15 years that directly confronts and exposes those who would wield enormous power over our lives. And all this in an election year. The relief at seeing these "remote" figures pilloried and exposed in such a hilarious fashion is cathartic and downright good for democracy.

With "MacBeki", Uys draws together the many strands that contribute to his singular status as one of the most important, influential and versatile public voices in the country.

Sometimes political situations in this wonderful country of ours really do play out like dramatic Shakespearean plays with twists and turns, betrayals and love affairs and in the end it all turns out to be a bit of a joke. Pieter-Dirk Uys has done just this with MacBeki,  making the current South African political divisions hilariously funny using Shakepeare's famous tragedy, "MacBeth" as the scene and setting.  The plot however is thicker than Shakespeare could ever have imagined.

Congratulations to Mr Uys, it's a true South African beauty.

‘MacBeki’ is pretty close to vintage PDU.  As the title suggests, Uys has appropriated Shakespeare’s ‘Macbeth’ for his own satirical purposes but his appropriation is pretty loose limbed.  [The production] soars, especially when it goes for broke. It shows that satire can actually be meaningful with enough imagination and verve.