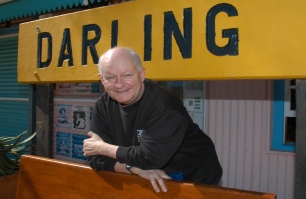 (additional articles about PDU can be found in the Archives)

A DARLING PLACE: All change on Platform Evita

After 25 years, Pieter-Dirk Uys and his faithful companion Evita Bezuidenhout have relinquished the keys to Evita se Perron to Hentie van der Merwe and Frits van Ryneveld, who will ensure their legacy endures.

Evita Bezuidenhout is an intrinsic part of South African history, and has been since the darkest days of apartheid, up till this very day — and many more in the future. Created by Pieter-Dirk Uys in the late 1970s, Tannie Evita, as she is affectionately known, made her home in Darling in 1996, at Evita se Perron alongside the train tracks running through the small Swartland town.

Comprising a museum, book shop, outdoor sculpture park, and theatre, the Perron was where Evita and her many friends hosted performances. Until March 2020, that is. Enter Hentie Van der Merwe and Frits Van Ryneveld, who are equal to the task of stepping into some very high heels.

“We are very aware of how important this place is, not only for Darling but for South Africa and for Afrikaans people,” said Van der Merwe. “It’s a place where this tannie has joined the Afrikaner National Party — she was a staunch member of that — then she moved over to the ANC. She’s transformed and is a good example for the Afrikaners that you can keep up with the times and not stay stuck in the 1980s. Pieter is such a brilliant artist; I think his legacy should be preserved, and the Perron is where that should happen.”

Van der Merwe and Van Ryneveld are the owners and creators of Darling Sweet, the successful toffee and caramel company founded in Darling in 2014. It now exports all over the world, and along with the new sibling, Swartland Kitchen, which makes rusks and biscuits, sees its products on the shelves of Mr Price Home. With backgrounds in fine art and drama respectively, they are perfectly positioned to understand the quirkiness of the Perron.

“Because we know him well, and we are made from the same fibre as Pieter — he is of course an icon — if we had been pure business people I think it would have been very different. We would have removed the quirkiness. And the Afrikaner kitsch,” said Van der Merwe. “I’ve never felt nervous about the project but I do feel a great sense of enthusiasm and excitement and what’s also nice is to know this is never — not as long as we live — going to go away. It will be here for the public to enjoy it. But it’s a hell of a privilege to have it.”

“Frits had his wonderful Mantis Mall with antiques and goeters,” said Uys. “He also was part of the Darling team that presented my Die Van Aardes van Grootoor at the Perron. Hentie came later and the launch of Darling Sweet pulled Tannie Evita into the whirlpool of energy with her special toffee. Their energy and enjoyment of hard work was catching.

“I always felt that they would be the ideal team for the Perron, but their in-tray was so full with toffees etc. It was just after mid-March 2020 with lockdown a reality when I met them at the Spar with the news that the Perron was forced into closure and they said: ‘If you ever think of selling, let’s talk’.”

Things were falling into place perfectly: Van der Merwe and Van Ryneveld had acquired the rusk business which launched its products — a range of five flavours including one that is sugar-free and just as good, I can assure you — at exactly that fateful time. They were baking in a back room of the toffee factory in town; they needed a production space, Uys needed someone to take care of the Perron.

“One of our toffies is Tannie Evita’s Classic Toffee, we gave money to Darling Trust of which I’m a trustee. It would be keeping it in the family. Pieter said ‘listen darlings, you can move in tomorrow’,” said Van der Merwe.

“Covid didn’t take prisoners. The decision to close was a hard fact,” said Uys. “We just had to do it properly with sad retrenchments and as little panic as possible. I knew the stage would not be used for some time. Refunds had to be made to those who had already booked tickets. I was quite ready to sit with a rusting closed building; I couldn’t see any light at the end of that tunnel.”

When the sale was negotiated, it still wasn’t quite clear what would be done with the place. “It became quickly clear our vision is exactly the same as Pieter’s all along. He even said it took 25 years to arrive where we are now,” said Van der Merwe.

“I gave them my bucket list of what-to-do that I’ve been working on since 1996. They have managed to make most of it already come true. I am thrilled and delighted,” said Uys.

The Book League Bookstore, with a large selection of fiction, non-fiction, and children’s books, as well as Uys’s own works; the outdoor sculpture garden and collection of apartheid signs in the Museum/Nauseum which is filled with artefacts, photographs, clothing, posters, and letters celebrating Boere Barok and Afrikaner history which allows us to acknowledge our past instead of sweeping it under a rug, all remain.

While there was a small restaurant before in the perron itself (now the depot for Darling Sweet), the theatre has made way for what is now called the Café. Included in this space is a treasure trove of vintage furniture and objets (a museum in itself); a retail area stocked with Tannie Evita Bezuidenhoudt’s brand of chutney, jams, preserves and Joumoerkoffie, as well as the Darling Sweet and Swartland Kitchen ranges of course, and various other products from different suppliers; and on the other side of a glass wall, you can watch the rusk factory in action.

This feature is not invasive because hanging high is a collection of some of Tannie’s famous frocks. “The orange, white and blue Voortrekker rok was what she wore in 1994 when she met Nelson Mandela at an ANC rally in Retreat. The golden long one was her official ambassadorial outfit. Her outfits could fill a city hall. I’ll add more to the Perron Collection as we go along,” said Uys.

The Café serves breakfast and lunch daily and focuses on a small menu of traditional favourites like vetkoek, jaffles, pap en wors, and koeksisters.

“Always in my life I wanted a restaurant but at the same time I know I can’t be an artist and have a restaurant — it’s too much of a commitment either way,” said Van der Merwe with a wry smile. He did some cordon bleu training when he was living in Belgium. “We got here and found we have a restaurant, an events company, a theatre, museum, book shop, art park. We had to find a way to make it all financially viable.

“I’m very happy, it’s very stimulating, Frits loves antiques and the museum is totally his passion. I love the whole  restaurant thing, and took some time to figure out how to do it. Initially I had all these plans for the menu but when lockdown eased and flower season came, the place was packed! There were queues around the corner, people were waiting for hours and they were cross — and I was in a toestand. I knew this wasn’t going to work. We had to rethink.

“So the menu is much more streamlined now, and our staff can handle it on busy weekends.”

The other new addition is the fine dining restaurant. It’s currently open for Sunday lunch, serving a very affordable set menu, and will open for dinner on Thursdays, Fridays and Saturdays after May 19, 2021. That’s when it will be featured on kykNET’s In Die Sop programme.

“It’s about Afrikaans cooking and exploring that tradition in a way that is fresh and contemporary,” said Van der Merwe, who described his first real kitchen experience as a huge learning curve, dealing with multiple things happening at the same time, and getting orders out on time.

“I’m getting there, the restaurant seats 20-25 inside, 20 or so outside. It’s manageable. I like the idea of being fairly straightforward and to the point and yet whatever you do, to pack it with as much flavour as possible. I do feel that sometimes you go to a restaurant and they are trying too hard and end up confusing the palate with too many flavours. After a five- or six-course tasting menu I cannot remember what I had.”

The focus is on local produce, said Van der Merwe. “The quail farm Hoekkraaltjie does fantastic goat’s chèvre and ricotta, we have a wonderful butcher, the Behind The Shed guys are doing edible flowers and a whole range of herbs, and I go to the market in Epping once a week, mainly for fruit.” Van der Merwe bakes his own sourdough bread which is used for toasties and jaffles.

“Everything we do here is with Pieter’s blessing, although we never felt like should we or shouldn’t we do this or that,” said Van der Merwe. “When we first bought it, he stayed away for a while, and then next thing we knew he came every day. The Tannie Evita character is central to this whole place so we made that building where the restaurant is Tannie’s private residence. Pieter loved the whole idea. He said ‘Darlings, why don’t you call it Kossie Sikelela like my cookbook?’.”

Which, by the way, can be bought in the Café or the bookshop.

“Every morning I walk down to the Perron as daily exercise to say hello to Anne in the bookshop, cuddle the three cats, and pop into the Perron to say hi to all. And stock up on rusks, toffees, muesli, and konfyt — all under Tannie’s brand. That is also very exciting. I couldn’t think of anyone else I would trust to protect her as they do with such love,” said Uys.

The theatre may still be dark but looking ahead with positivity, Uys said, “Bring your bum to our seats! The stage is waiting for the audience; once the vaccine gives all a sense of safety and calm, it will be business as usual. I have a new show, as well as the classic Tannie Evita praat Kaktus (It is the longest running theatre show in the history of South Africa! Since 1996!). During lockdown Evita was also behind closed doors like everyone. As she couldn’t get to her hairdresser for the weekly session, she allowed her natural look to emerge, inspired by Helen Mirren, Jane Fonda and Judy Dench. The post-Covid Evita will also have adapted — as we all will have to adapt to this ‘new normal’.”

The author supports The Darling Trust, a charitable trust that assists the Darling community.