The show is a synthesis of the fictive but very real life of Evita; Pieter-Dirk Uys as artist/satirist/activist — and witness. He was there. We are here now, in the pandemic, in lockdown. Unmasking Evita brings together a potent mix of theatre, TV, film and digital stage. Don’t miss this opportunity to see the iconic Pieter-Dirk Uys on the screen and you will see what I mean.

Delicious entertainment that positively crackles. Long may both Pieter-Dirk and Evita reign!

Looking back over the 40 years Uys and Evita have spent lampooning the political elite in South Africa, you truly appreciate how important freedom of speech is. It’s something we need to treasure, just as we need to treasure two of the country’s most iconic people. So, go and celebrate four decades of fun with them at the Elizabeth Sneddon this week.

***** Evita is incomparable and so is PDU. They feed off each other. It’s thrilling to see them heckle each other on stage. Don’t miss this extraordinary show by the incomparable, legendary Pieter-Dirk Uys –- as himself and as he steps into the skins of real and un-real figures. Do not miss.

It is classic Pieter-Dirk Uys and classic Evita Bezuidenhout: thought-provoking, funny, from the heart and on point with the current popular conversation. A great show with a lot of heart and a lot of laughs.

The comedian’s ingenuity as well as his gift for the unexpected are the chief strengths of #HeTwo: Evita Exposed! With enviable aplomb, he constructs and deconstructs his alter ego before our eyes. What could be more subversive? Or more delightfully thought-provoking? Or more typically PDU?

During this retrospective we see Evita being honoured and adored, The role Uys and Evita have played in our country’s history is indisputable.

In #HeTwo: Evita exposed! Uys reflects on his 38 year-long relationship with Evita, the amazing people she/he has met, and the adventures they’ve had along their journey together.

Reviews of #HeTwo in Johannesburg — August 2019

Watching Uys at work gives you goosebumps. He is a master of the give and take of political nuance, interjecting barbs so bright and sharp that you don’t see them coming, with fierce and earth-shattering repartee that, rather than pulling punches, perfumes them.

Uys entertains with savvy satire, up-to-date observational humour, quick costume changes and spot-on impressions, but if you laugh and then simply leave, you’ve missed the point. #HeTwo clearly displays how far South Africa has moved forward during Uys’ career, but it also illustrates how much work there still remains to do. Get to it.

#HeTwo features the inimitable Pieter-Dirk Uys and his world famous alter-ego Evita Bezudenhout sharing the stage. A great show and a wonderful tribute to one gutsy Lady, created with masterly style. A class act. 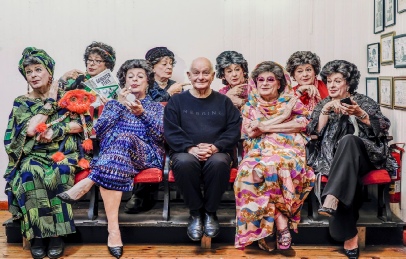