REVIEWS OF 50 SHADES OF BAMBI IN JOHANNESBURG  — FEBRUARY/MARCH 2014

It’s hard to believe that a man of 67 in a long blonde wig can project such a compelling and believable female personality on stage.

But this is Pieter Dirk Uys and that’s exactly what he does.

Of course, he’s had plenty of time to shape Bambi Kellermann — she even has her own biography on sale in the foyer of the theatre.

For those who don’t know, Bambi, born Baby Poggenpoel in Bethlehem in the Free State, is the rebellious younger sister of the undisputed First Lady of South African theatre, Evita Bezuidenhout, doyenne of satire, wit and pithy political comments.

Although he couldn’t resist bouncing off the news headlines — the budget is fair play after all — Uys’s focus here is on sex, drugs and (well, I had to finish the quote) rock ‘n roll.

Bambi does a lot of her own singing — adequate, but not Uys’s top suit — but he is accompanied by Godfrey Johnson, who more than fills the gap with his expressive voice and piano pyrotechnics.

It’s a war-weary Bambi this time around, old, disillusioned, tired, knocking back the brandy, but still capable of rousing a feisty spark or two. Now that her stripping and sex-worker days are long gone, she spends her time with her cats and her good works, running play groups and visiting orphanages.

And she has a message — a serious message for parents and children.

Relating her experiences growing up as a barefoot young Afrikaner girl in Calvinistic Bethlehem in the 1950s, where the only sex education was “sies”, her message is simple — communicate.

Parents, talk to your children about sex, tell them what lies ahead before the disillusionment sets in. Talk to them before the drug lords do.

Egged on by her role models on the silver screen, Bambi had her first experience at her first dance with the hero of the rugby team and finished the job in the backseat of a car in Vienna.

Regrets? Perhaps a few, but when she made mistakes, she fixed them. May we all do the same.

There is some frank talk, some poignant moments, some pointed lyrics and, yes, some satire. Even Number One gets in the picture. “Make up your mind,” she tells him with Godfrey’s full-throated assistance.

The corollary is that we must make up our minds too — it’s neither comfortable nor productive to sit on the fence and there’s an election coming. Obviously the Poggenpoel sisters can’t shake loose from politics even if they will never be seen on the same stage at the same time.

Fifty Shades of Bambi with Pieter Dirk Uys is at the Auto & General Theatre on the Square until March 16.

NOT so much a cabaret as a boere-burlesque, Pieter-Dirk Uys’s show 50 Shades of Bambi revels in being as salaciously sexual as its literary counterpart (if 50 Shades of Grey can be described as literature). But this is no cheap, pseudo-erotic sleazefest: it is a bittersweet fictional musical memoir of one of Uys’s alter egos, former stripper Bambi Kellermann, which also pokes fun at verkrampte attitudes to sex and sexuality.

It’s no accident that the show opens with pianist Godfrey Johnson singing These Foolish Things, because this show has its tongue — actually, make that a pink Roger Rabbit sex toy — firmly in its cheek.

On stage is a washing line sporting various kinky fetish goodies and sex aids. We realise that this will be no genteel Sunday picnic for mother grundies, but entertainment with a risqué edge.

For those who don’t know, Bambi is the younger sister of another Uys creation, Evita Bezuidenhout, often referred to as "the most famous white woman in SA". But unlike the prim and proper Tannie Evita, the lesser-known Bambi is a bad, bad girl.

Born Baby Poggenpoel into a conservative Free State family, the sheltered teenager ran away to Germany because she "didn’t want to die a virgin in Bethlehem", married a Nazi and became a sex worker on Hamburg’s Reeperbahn.

In this Fleur du Cap-winning show she is now in her 70s and looks back on her wicked but wonderfully eventful life. The Marlene Dietrich of the platteland, she channels a torch singer of the decadent Weimar era in a blonde wig and black leatherette pants suit, clutching a whisky glass and lit by sultry red lights.

Alternating between nudge-nudge-wink-wink ribald and wistfully reflective, she summons the audience into her confidence with personal recollections sprinkled with musical interludes. In a delightfully bizarre touch, atop the piano is a thermos flask supposedly containing the ashes of her late husband.

It’s an intimate show about personal and sexual liberation, about banishing that old Afrikaner guilt that caused so many people (including, no doubt, the youthful Uys himself) to view sex as shameful and dirty — and possibly get themselves into trouble as a result. Cocking a snook at such poppycock, Bambi/Uys cheekily gives traditional volksliedjies such as Hier’s Ek Weer and Hoe Ry die Boere Sit-Sit-So a subversive twist, in between Kurt Weill standards.

So immersed does he become in his character that the audience occasionally forgets that it’s Uys in costume — and who knew he had such a good singing voice?

Unlike Evita, Bambi steers mostly clear of politics, making this a refreshingly personal show that fearlessly lifts the covers on sexually suppressed attitudes. Several shades away from ordinary, the bold and bodacious Bambi is anything but grey — but how about a striptease in a champagne glass, a la Dita von Teese? Get ’em off, Bambi!

• 50 Shades of Bambi is on at the Auto and General Theatre on the Square in Sandton until March 16.

It’s the day-to-day political onslaught that the artist hopes to counteract. And it’s even more heavy-handed than usual because of the looming election.

Take it away Bambi, he seems to say, and she does as she launches into her own politics — sex. Let’s talk, she says as she flaunts her promiscuous lifestyle yet wanders through the innocence of youth which is often extremely dangerous because of the silence that surrounds their lives.

“Speak to the children,” she warns. They need to know and if you don’t someone else will.

Then Bambi gets down low and dirty, speaks her mind to show how it’s done and says with pride that she’s experienced everything — twice. But Bambi is no ordinary tannie. And she’s got the accent to prove it as she launches into song.

“I know I can’t sing,” she says but her pianist, Godfrey Johnson persuaded her that it is the best way to tell stories. In typical cabaret style they draw on Kurt Weill and Gershwin as well as Bambi’s roots with Al Ry die Boere Sit Sit So which she turns hysterically into her own rhymes of reason — delightfully so. These old Afrikaans folk songs are ripe for the picking and Uys willingly complies.

It is the artist at work that draws you in. And even as she waffles too long every once in a while, she constantly catches you off guard with her sharp wit which turns a mild-mannered phrase into something completely different.

Thinking on her feet whether they’re clumsy crocs or sassy stilettos, is Bambi and her creator’s motto. To speak their minds, whatever subject they’re tackling, that’s the credo. They don’t really care whether it’s drugs, sex and rock ’n roll or what life holds. “Is that all it is?”

There’s silly and there’s serious and Bambi does both as she talks about condoms and vaginas, female contraception and the apartheid between children and parents. “It’s back,” says Bambi sadly.

But she’s trying to change that with free speech. We still have that and she won’t spend the night in jail, she concedes. And that is the huge difference. but she has a wagging finger warning: “Don’t take it for granted!”

But if you’re pulling out your hair because the politics are so overwhelming, the silly stuff dominates as Bambi tells of her life and her loves and even her long deceased husband who still accompanies her as an accessory even if she sometimes thinks of leaving him behind.

What you’re seeing is not only Fifty Shades of Bambi but rather Fifty Shades of PDU, an artist who knows how to speak to the hearts of his audience. And this time he does it in both stilettos and song.

This Bambi is not a sweet dear. She has lived a sordid life and now, having moved into her ‘70s, returns to her homeland to reveal all.

Satirist Pieter-Dirk’s Uys’ alter ego, Bambi Kellermann, the sister of Evita Bezuidenhout, is back in the full glare of the spotlight, blasting off about the country, sexual matters of a very sensitive nature, drugs, rock ‘n roll and anything else that catches her eye.

Dressed to the hilt, with a sharp blonde wig and in a full-length black costume, Bambi Kellermann provides audiences with a cheeky look at her naughty past, her troubled life in the small town of Bethlehem in the Free State and her stripping success in the fleshpots of Germany, where she spent most of her life.

Next to her is an urn with the remains of her Nazi-husband, giving us some understanding of her warped sense of humour.

And it’s this wicked sense of humour, with some explicit sex education thrown in for free, as Bambi holds court for an hour-and-a half, dispensing gems of wisdom and her own special take on South Africa. She also makes no bones about hating her famous sister, Evita and they’ll never be seen at the same place at once.

She sings popular songs, which are given some ingenious lyrical twists, to the accompaniment of Godfrey Johnson’s elegant piano (boy, can he sing) and conjures up an evening that is strictly not for prudes.

It’s different, occasionally tedious, but a “story” that certainly makes one think — especially her insistence that we all make a difference at the elections in May.

SANDTON — Pieter-Dirk Uys who plays Bambi Kellermann in 50 Shades of Bambi had audiences wrapped up in laughter and falling off their seats at the Auto and General Theatre on the Square.

She was joined on stage by musical director, Godfrey Johnson, who enthralled audiences with his singing and piano skills while Bambi took a raunchy ride to the other side of love-making, coming of age and the pleasures of happiness.

Bambi also raised her concerns about the lack of communication between parents and their children, and labelled it ‘the new apartheid’. Bambi told audiences how she was never told about sex as a youngster and how this culture had to stop with the new generation. “Parents must talk to their children about sex; not this birds and the bees business,” she added.

She went on to interrogate current affairs and made fun of South African politicians as well as the Afrikaner culture.

“We just wanted to have a good laugh and we knew she would do that for us,” said Vannessa Connellan, an audience member.

The musical is recommended for anyone who believes in freedom of expression and the right to choose what is best for them. 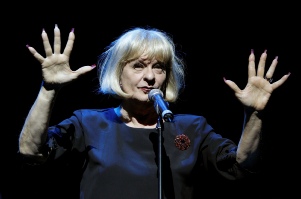