REVIEW OF BAMBI IN KABARET IN FRANSCHHOEK — MAY 2012

As the day draws to a close, the festive main street of Franschhoek has finally quietened down a little after the day’s hubbub, in which you can spot writers, critics and media personalities all over the place. Those of us gathered at the Church Hall keenly await the evening’s performance. Bambi Kellermann (formerly Baby Poggenpoel) is in town to sing and seduce festivalgoers with her unapologetic cabaret.

The estranged sister of “the most famous white woman in South Africa” has recently released an autobiography (much to the ire of Evita Bezuidenhout), a story which maps her titillating travels, introduces readers to her famous friends and documents her colourful life.

Franschhoek’s church hall is small and it’s difficult to navigate the crowded foyer but it’s amazing how one can manoeuvre with a glass of wine in hand. The atmosphere is intimate and the stage uncluttered; an upright piano at the foot of the stage doubles as a dressing table. Two candles and the hall chandelier cast a soft light over two martini shakers and a black-and-white photograph of Bambi.

The murmur of the settling audience is occasionally interrupted as a stray foot knocks over an empty wine-glass. With all the bumping and finding of seats, it’s easy to miss Uys gliding down the makeshift aisle.

Minutes later the lights are dimmed and Uys is on stage to open the show. Clad in black, he kneels behind the dressing table and talks about Bambi. As we learn about the “only woman to ever call Evita a bitch”, he begins to apply his makeup. Deftly and with skills I wish I could muster myself, Uys applies his astonishing long lashes and is ready to complete his transformation into Bambi.

With his back to the audience, he implants (her) breasts and applies the blonde bob. Once he turns back to face us again, Pieter has disappeared and Bambi has taken over the stage.

Evita’s scandalous sister is seductive. The girl from Bethlehem has the audience transfixed with her German accent and her tall tales of Nazis, film stars and a spectacular loss of innocence in strip clubs and hotel parties with figures like Bertolt Brecht et al.

It is difficult not to become immersed in her world and be tantalised by her past. She reminisces about her escape from the Free State and her entry into the world of “old” Europe. It’s not all nostalgia; Bambi sings some unseemly songs that elicit both laughter and gasps from the audience. Whether or not the lyrics of the song she is performing are risqué, Bambi is fully immersed and invested in her story and her songs, and the audience is rapt.

Her passion is complemented by pianist Godfrey Johnson, who plays the piano with so much fervour that one of the colossal candles on Bambi’s dressing table falls over. Ever the professional, Bambi carries on and brings her song to a close. Godfrey remains unscathed.

Bambi talks extensively about her past; we hear how Poggenpoel became Kellermann. Soon after arriving in Germany (after escaping the dull, virginal life of the Free State), Bambi marries Baron Joachim von Kellermann. The young Bambi is unaware that her husband is a Nazi and their marriage turns out to be an ordeal.

Luckily, the Nazi eventually dies in Paraguay (where he was the Minister of War), releasing Bambi from a tumultuous and oppressive partnership. Yet he remains present throughout the evening. His ashes rest in one of the martini shakers, which Bambi at times confuses with the one that actually contains her drink.

Bambi is not Evita. She is crude, promiscuous and runs a brothel in Paarl. But as can be expected, she delivers some satirical political criticism and insightful commentary inbetween all the other absurdities. As she reaches the end of her performance, she illuminates some of her thoughts by delivering an insightful comment:

We are all going to die. But can we just live and enjoy the fantasy of life?

Bambi does just that; she lives. An hour was too short to get completely naked with her but it was enough just to see her in action. Those who aren’t quite ready to live as wildly as Bambi does –and take her up on her invitation to visit her establishment in Paarl – can take her other piece of advice: get naked in front of the mirror at home and have a good laugh. Otherwise, read her book – the pictures alone will do the trick. 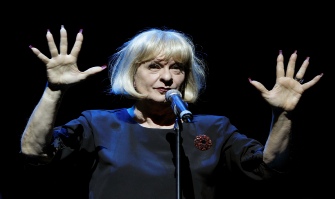