Pieter-Dirk Uys’s latest book – One Man Shows: the black and white years – published by Missing Ink, is presented here free for all who wish to download and read it.:

Download the text of One Man Shows: the black and white years

Uys, who has made all of his dramatic play scripts available online, spent the 2020 pandemic lockdowns sorting out the satirical revues that have been part of his life since 1981. One Man Shows: the black and white years includes his first seven one-man shows. It takes the reader through the revues that dodged censorship and the authorities, and shows how he used humour and irony to highlight the hypocrisy and corruption that were part of South Africa’s daily life under apartheid.

* His first one-man show, Adapt or Dye, opened on April Fool's Day in 1981 and introduced Evita Bezuidenhout to the nation and then the world, touring internationally throughout the 1980s.

* Beyond the Rubicon played on PW Botha's notorious speech at the 1985 National Party Conference, where his announcement of crossing the Rubicon caused the rand to become a cent overnight.

* Rearranging the Deckchairs on the SA Bothatanic depicted South Africa as a luxury liner with familiar white people in first class and everyone else in steerage.

* Cry FreeMandela the movie, inspired by Richard Attenborough's film Cry Freedom, showed a local version of the dramatic story of an escape from the security police with the news of brutality and murder most foul.

* A Kiss on your koeksister took the shape of a 1990 National Party bazaar that bizarrely showed the state of a confused white nation after the release of Nelson Mandela and the unbanning of the ANC.

* The 1994 election inspired One Man One Volt, which was performed over the tense and exciting days of capturing a rainbow nation while turning black and white into colour.

In addtition to the text of each show, Uys also takes the reader through the backstory of each production, the ups and downs of the politics of the day and the media reactions, and includes archival photos of the characters and the famous faces of the Volk.

Uys might have been alone on stage, but his chorus line of characters in One Man Shows: the black and white years filled each performance. While the politics of the black and white years are anchored in 1981 to 1994, the realities of political tensions, legalised racism, corruption, state capture and rumbles of revolution make what this one man shows through this book very topical at this time of pandemic regulations, misinformation and political confusions. 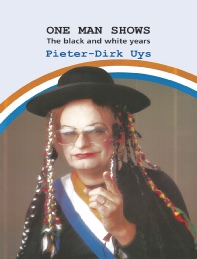