F.A.K. Songs and Other Struggle Anthems 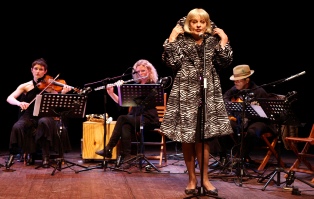 Reviews of F.A.K. Songs and Other Struggle Anthems  in Cape Town  —   September 2010

Uys, a consummate showman, understands completely the language of the theatre, threading a bit of Bambi's personal history with political and social commentary and much mad wit and pathos. ... FAK Songs and Other Struggle Anthems is a cabaret in the true sense of the word and a production that restores this much-abused genre back to its dark, decadent, disturbing, sarcastic and satirical essence.

Pieter-Dirk Uys's Bambi slaughters sacred cows with her sharp wit .... The Federasie van Afrikaanse Kultuurvereniginge (FAK) Songbook is ripped to pieces, rearranged and spiced up with bloodthirsty vulgarity and embarrassingly true lyrics containing all the sad sordidness and joy of the human condition.

Bambi is a gift from Pieter-Dirk Uys we should treasure while we have her with us.

Pieter-Dirk Uys remains a consummate performer, who is able to draw and hold an audience, no matter how uncomfortable the subject matter.

A sublime marriage of musicianship, characterization and textured showmanship.

Bambi's music is sophisticated and clever. She sings in three languages: English, Afrikaans and German. The combination of FAK songs, twisted to up-to-date relevance, with Brecht and Weill numbers is remarkable.

As usual Uys is spot on ... and goodness knows he still has the legs to be wearing high heels.