Pieter Dirk Uys says that he never has to write his scripts. Politicians do it for him. The response from the Minister in the Presidency, Mr Essop Pahad, to Uys' passionate letter calling for the removal of President Mbeki in order for the scourge of HIV/AIDS to be properly addressed, is probably a case in point.

But Pahad's response, once it has served its purpose as the basis for ironic and satirical comment, is disturbing for a number of reasons which have less to do with the HIV/AIDS pandemic, and much more to do with the intolerance of democratic voices that attempt to speak truth to the situation, and the manner in which some in government manage criticism. In recent times, we have witnessed the deliberate and increasing undermining of democracy and freedom of expression within the arts and culture sector by the authorities, and even for this reason alone, it is important to react to Pahad's response to prevent further erosion of democratic creative expression.

First, Pahad deliberately uses Uys' well-known role as a satirist to dismiss his comments as "antics" and as those of a "comedian", and so therefore not to be taken seriously. But Pahad misses the point. Satire is a centuries-old form of social commentary. In the past, Uys has used humour and ironic comment to make a range of potent political and social points, and he continues to do so in his guise as Evita Bezuidenhout but also in his educational shows about HIV/AIDS. Yet in his letter, Uys does not use satire at all. He has made his comments as Pieter Dirk Uys the South African citizen, the HIV/AIDS activist, the human being who actually knows people living with HIV/AIDS, who really does know people who have died of the scourge, who does not deny the depth of the crisis it presents to our country, and who is passionate about his responsibility as a citizen to contribute to addressing it in some way. It is precisely because he believes that Mbeki is a major stumbling block in tackling the scourge that he has taken the bold step of calling for him to be replaced by a leader who more visibly demonstrates sensitivity, understanding, vision and compassion in this area. This is not simply the statement of a comedian; it is the call of a true South African patriot deeply concerned about the most severe challenge to face the country in its first decade of democracy.

Pahad's response though, clearly reflects one strategy that some in government use to manage criticism: caricature the critic and so seek to denigrate and dismiss their criticism, without having to address seriously what they are saying. 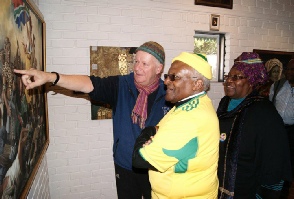