Nkosi S’kilele Moi! That’s the survival motto of Nowell Fine, one of Pieter-Dirk Uys’s legendary characters, a committed (when it suited her) liberal in the apartheid era and Comrade Madam in the new South Africa. Going Down Gorgeous, running at the Elizabeth Sneddon Theatre until May 9, follows her life from 1976 until the year 2004.

It’s not wholly Nowell’s story, though, because wherever Nowell goes, Dora’s not far behind. Dora is Nowell’s maid who is called for, talked to and yelled at all through the play although we never actually see her.

The show starts with Pieter-Dirk as himself, in a black leather jacket with his name on the back in sequin studs. He bought it in New York when he was younger (and thinner!) and spent the next hour or so in Central Park sticking the studs on. The result was beautiful except that he’d made a spelling mistake and ended up with Pieter-Drik Uys!

After a brief preamble he admits that “I can’t surf the waves or the net but I CAN put on lipstick without a mirror!” That lipstick is an important prop in this hilarious show which sees Nowell in different periods of her life. For each time lapse, linked with songs by Doris Day, there is a change of costume, jewellery, designer glasses and wigs. And each time, more lipstick!

We first meet Nowell in 1976 in blonde chaotic curls and flattering red blouson pants, having more than a mistress-servant relationship with her gardener, the (also-unseen and oft spoken-to) Nimrod — “don’t dig those plants up, Nimrod, they’re madam’s medicine!”.

From then on as we flash through time, it’s a dizzying round of bitingly witty dialogue and clothes that become more and more PC until the ultimate 42-piece outfit — “What goes where … and how?” But, despite the hypocrisy, the nasal voice, clanky bangles, dazzling rings, incredibly high heels and designer glasses it’s impossible not to feel drawn to this outrageous character.

Dora starts working in the ANC offices. Nimrod disappears and Nowell has no idea whether he’s “been murdered, dead or in the government.” A battle to move squatters off her (imported) lawn gives her a brainwave “in my very own brain”. Why not negotiate? Here might be a solution to the lack of black representation on the board of the company she owns with her husband.

A summons to appear before the Truth and Reconciliation Commission to give a reference for someone who worked for her has her distraught. Was it Nimrod? Horrors, could it have been someone she slept with?

Her husband leaves her — it’s just now her and Dora. A visit to Robben Island decides her that something needs to be done about “that stark concrete look”, it needs a whole revamp, to make it look smart and trendy.” Outside PAGAD have a peaceful demonstration — “Blood and Muslims everywhere” — but she and Dora are on their way to Australia to join her family. And what better present could she take them from South Africa, but … the maid!

The play closes in 2004 with Nowell, now an old and arthritic lady. She and Dora decided that Australia was not a good idea. Dora is now a minister and comes to see Nowell regularly in a motor cavalcade with bodyguards. “From maid to minister and she can’t even spell the word `catastrophe’,” quips Nowell.

Don’t miss it — Nowell gives Evita Bezuidenhout a run for her money!

A 13-part series of Going Down Gorgeous was due to be screened on SABC but it has been temporarily shelved as the SABC felt it wasn’t appropriate to put it out before the elections! 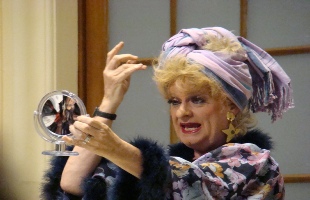