Evita is back in Durban in fine form, pulling no punches!

Evita is back in Durban and in fine form, pulling no punches in exhorting South Africans of all races, cultures and social levels to pull together as one to get the country back on track and reclaim our precious democracy!

Pieter-Dirk Uys does it again — inviting us to spend a delightful evening with Evita Bezuidenhout. This time there is a strong inspirational and motivational message behind his show, Evita Bezuidenhout & the Kaktus of Separate Development, but it’s all beautifully woven into clever and often hilarious entertainment.

Tannie Evita has received as much recognition and international acclaim as her creator!

I remember the night all those years ago at the Elizabeth Sneddon Theatre when he packed Evita away, saying that now democracy had been achieved and we had a strong leader in Nelson Mandela, she wasn’t needed any more. The audience reaction that night was fascinating — gasps of horror as she slowly stripped away stockings, corsets, high heels, dress, wig, nails and make-up and packed them away into a case. It seemed as if they were watching a suicide.

Well, Evita didn’t stay packed away in her case for very long. Announcing her return to public office as the ambassador to the fictitious homeland of Bapetikosweti, Uys said at the time that the government and its associates were providing fantastic comedy material and the opportunities were too good to lose.

Since then, Evita has gone full steam ahead — many years of taking the mickey out of South African politics and politicians — always impeccably dressed, manicured and hair-styled.

We meet her in this show as she enters through the auditorium making a desperate phone call to Gwede (ANC Secretary General, Gwede Mantashe) complaining that her props haven’t arrived for her Imbizo and what is she to do with a set covered with three step-ladders and a black stage curtain lying on the floor? There’s also a Julius Malema doll on one of the step-ladders and a carton which has some very interesting contents.

Surprisingly now a proud junior member of the ANC, she’s not supposed to divulge policy but that doesn’t stop her! She also talks about Nelson Mandela’s love of plants, a possible sexual harassment moment by Donald Trump and discusses a number of books about South African presidents found in the carton.

By interval, Evita gets a call to say that her set has arrived and so we move into the next phase of the show. Dressed to perfection in an elegant sequinned dress, she then proceeds to explain the props. There is a massive painting of the Battle of Blood River, a dilapidated piano with pictures of the Dromedaris, Jan van Riebeeck, Maria van Riebeeck and van Riebeeck’s arrival in Table Bay. On top of the piano is a large cactus. There’s also a shelf containing a pair of Dutch clogs, miniature ornaments of a Voortrekker-styled wagon, the Voortrekker Monument and a veiled item which is revealed later!

She then proceeds to give her own version of van Riebeeck’s arrival and the history that followed. There is much talk of her culinary capacity and she proudly maintains that the diet she introduced to Luthuli House is working because you can now see politicians fitting into economy class seats!

In amongst the humour and amusing stories, Evita Bezuidenhout & the Kaktus of Separate Development urges every single individual in South Africa to get involved and make a difference.

As always, there are memorable lines such as “An overweight government under-thinks” and “Boerewors is haggis with a sense of humour” as well as the more serious statements that underpin her show: “Apologies are fine but are no use if you aren’t prepared to move on” and “Never think that freedom lies around waiting to be discovered”.

There’s no chance of your attention wandering because Evita’s casual throwaway sarcasm is often as outrageous and hilariously clever as the rapid-fire delivery of the main script.

Evita Bezuidenhout and the Kaktus of Separate Development is running at the Elizabeth Sneddon Theatre until November 19 with performances on Wednesdays, Thursdays and Fridays at 19h30 and on Saturdays and Sundays at 19h30 and 15h00. Booking is at Computicket www.computicket.co.za 0861 915 8000 / Shoprite Checkers Money Market Counters.

Comedy with clout and cacti

Then there are the nudges, winks, jabs or stabs at just about everyone from Donald Trump and Jacob Zuma to Thabo Mbeki, Pik Botha, Desmond Tutu, Jessie Duarte, Julius Malema… even Steve Hofmeyr.

All this and lots more find place in the latest collage of comedy with clout and lots of prickles, written and performed by South Africa’s finest satirist, the legendary Pieter Dirk-Uys who, at 72, shows no signs of slowing down.

I was a little disappointed, to be frank, to hear that Uys was returning to a frock, wig and long eyelashes as the iconic Tannie Evita Bezuidenhout.

I’d thought he might have decided to hang up the high heels to pave a new way ahead for himself, theatrically, following the tour de force that was his powerful, hugely rewarding solo show, as himself and about himself and his family, The Echo of a Noise, seen earlier this year. I rate it as the best thing he has ever done.

Even a good 20 minutes into the first half of Evita Bezuidenhout and the Kaktus of Separate Development  I had some misgivings. For all its fun, good flow and sharp wit, was this just another trip down memory lane, tannie wallowing in her own nostalgia while reflecting on milestones of Uys’s four-decades-plus of holding up a cracked, warped mirror to South Africans?

The Afrikaner once dubbed “the most famous white woman in South Africa” walks through the audience, hair in a turban and cellphone in hand, to arrive on a stage where stepladders stand in front of a partially open red curtain.

Tannie, now a junior ANC member and knowing what’s cooking in Luthuli House, laments the fact that the ANC have not delivered (props for her show, that is).

She goes on, while she waits for her delivery, to fill the show’s first half with assorted observations and anecdotes — such as once being groped in a New York lift by a man with orange, candyfloss-like hair. Nudge-wink-say-no-more…

Evita also talks about the day she made koeksusters for Jacqueline Onassis… and discusses the weights and weightiness of biographies by former South African presidents, proclaiming Madiba’s book a creative weapon of destruction.

She also discovers some hidden goods and secrets in a cupboard…

It’s a long and amusing first half, but it is good to report that the second half is better. It is more snappy, sharper with its wit, and Uys is on excellent form, particularly when he has off-the-cuff chat with audience members.

Tannie returns, her props having finally been delivered, to appear in a shimmery frock against a backdrop of a massive framed picture of the Battle of Blood River, a table featuring varied items and a piano to the left of the stage.

It is here that Evita tells us that all we learned in school about South African history has been fake. And it starts with the arrival of Jan van Riebeeck, the Great Trek, that bloody river battle, the rise and prison release of Madiba, the resultant sense of euphoria and hope… and stops at the sea of uncertainty that is the murky patch of current politics in this great country.

The ace from Uys is that he spares no prisoners in his satire – everyone and everything gets a shake or a rattle as he rolls out the punches with a sly smile and a twinkle in his eye. The result is that while one often chuckles or guffaws, it is sometimes with a sense of sadness. Or with a squirm.

There is no doubt Uys remains a master of his craft and as topical and clever as ever. I thoroughly enjoyed the new show, but I do hope he pursues more stage work in similar vein to the superb The Echo of a Noise.

Evita Bezuidenhout and the Kaktus of Separate Development is in Durban until November 19. Performances are at 7.30pm Wednesdays, Thursdays and Fridays, and 3pm on Saturdays and Sundays. Tickets are available at Computicket. 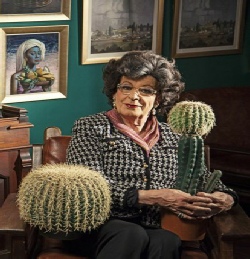