You ANC Nothing Yet

With Flattery for None and Scorn for Many

Humor, like wine, often travels poorly. So it is a pleasure to report that the volatile cargo of satire packed by South Africa's comic conscience, Pieter-Dirk Uys, has arrived in the United States in most savory form.

This vintage material has been uncorked as part of the 15th Anniversary Next Wave Festival at the Brooklyn Academy of Music, where its all-too-brief run ends on Saturday. This one-man show, titled ''You A.N.C. Nothing Yet!,'' is well worth the trip, although Mr. Uys (pronounced ace) is quick to confess that he really could be spending his time doing something else while he's here: seeing the real Africa in ''The Lion King.''

Brimming with potent irreverence, Mr. Uys's work is a refreshing jolt to the senses of Americans dulled by sitcom humor and inhibited by the bland norms of correctness in a nation afflicted with political apathy. It is also a showcase for a fine actor, gifted political humorist and courageous humanitarian.

Mr. Uys has honed his wit on the grindstone of oppression. And having survived the apartheid Governments of South Africa, he does not shy from turning his scorn on the shortcomings of its democracy, among other targets.

Like all great comedians, Mr. Uys is no respecter of persons, from Nelson and Winnie Mandela, Bishop Desmond Tutu and former presidents and prime ministers of South Africa to Michael Jackson, President Clinton and Secretary of State Madeleine K. Albright.

But before he skewers them, he first dissects himself: middle-aged, fat, bald, Calvinist, Jewish and queer are the words he uses. Mr. Uys uses words well and without inhibition.

Unsparing in his targets, he is a man who says he remembers Michael Jackson when he was black, disdains the old Jew who escaped the Holocaust only to sell ''whites only'' signs in South Africa, ridicules visiting blacks searching for their roots and saying, ''Oprah was right,'' and observes that Nelson Mandela is an unusual officeholder, having gone to jail before going into politics, not the other way around.

Mr. Uys views the world's willingness to forget the horrors of the Holocaust, of genocide in Bosnia and of torture in South Africa as a collective case of Alzheimer's disease. And he likens the South Africans who now deny supporting apartheid to the post-World War II Germans who denied casting their votes for the Nazi party.

In the most chilling and poignant portion of his show, Mr. Uys recreates a meeting at a Michael Jackson concert in South Africa between a Jewish Communist back from exile and the man who subjected him to hideous torture under the old regime. Having confessed that his crimes were politically motivated, the torturer now has amnesty for life. And he is a security agent for President Mandela. ''Maybe the new Government wants to learn from an old master,'' he says.

Performing in the cabaretlike setting of the Hillman Attic Studio at the Brooklyn Academy, the rotund, rubber-faced Mr. Uys stands on a small stage before a clothesline hung with his costumes and scarves, many of them in the yellow, green and black colors of the African National Congress. He has a box filled with wigs and accessories, and women are among his most vivid characters.

He has brought with him his most famous creation, Evita Bezuidenhout, who expresses her happiness these days at being able to admit while visiting the United States that she is an Afrikaner and no longer pretend to be an Australian. And he has studded his show with some biting local and topical references to Brooklyn, Marv Albert, and Mayor Rudolph W. Giuliani.

As advertised, Mr. Uys is a national treasure, and in ''You A.N.C. Nothing Yet!'' he stimulates the mind and invigorates the conscience while tickling the funny bone. 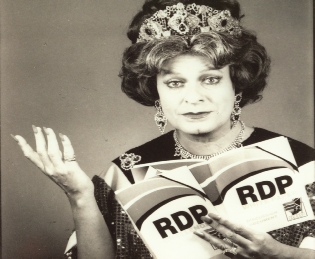