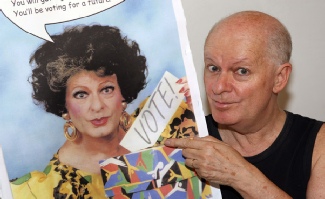 The more things change, the more they stay the same. This is the message of the new show from South African satirist Pieter-Dirk Uys.Elections and Erections celebrates 10 years of democracy and sexual freedom, but it is a bitter-sweet birthday. Poverty is everywhere, Aids is rife. Apartheid is dead, but hypocrisy - "the Vaseline of political intercourse" - is alive and kicking.

You don't have to be too intimate with Jo'burg intrigue to enjoy this multi-voiced monologue. The nimble 59-yearold is a consummate impressionist, gliding through umpteen costume changes, opening with the rosettefestooned ex-President Botha accidentally sieg heiling like an Afrikaner Arturo Ui.

Uys's most familiar creation, Evita Bezuidenhout, promptly arrives to mock the white South African ex-pats in the audience, who no longer have to pretend to be Australians when visiting London. It's a witty address, but more of a cameo than lead role.Past London visits have featured extended pieces, but here Uys prefers a rapid turnover. Desmond Tutu flits in as a cartoonish cleric, Nelson Mandela is disappointingly restrained, but Winnie is resplendent in designer handcuffs. Uys tells an unforgettable story about doing her and discovering she was in his audience. A bodyguard later came backstage to compliment the very relieved star.

Occasionally the pace dips, but as in panto the villains leap in to steal the show. Most breathtaking is Mrs Mugabe, portrayed as a chilling crone who has sucked Zimbabwe dry and is now eyeing up Surrey.

Later, an ex-policeman apologises for murder as part of the Truth and Reconciliation policy, only to reveal his true colours in anger. Sadly, Uys implies, you can't always teach an old dog new tricks. The canine metaphor is apt. Behind the frocks and smiles this satire has more bite than a rabid rottweiler.

Has 10 years of democracy made the South African satirist Pieter-Dirk Uys go soft? Palpably not. The title of his brilliant new one-man show may be inspired, as he says, "by the two things that were illegal during most of my life", but he is as harsh on President Thabo Mbeki, particularly his indifference to the Aids pandemic, as he ever was on apartheid.What is impressive about the new 90-minute show is the way it combines simplicity of form with richness of content. Appearing before us in black rehearsal gear, Uys uses minimal props and costumes to offer a tour d'horizon of South Africa past and present.

A jabbing forefinger and a jutting jaw turns him into an apocalyptic PW Botha. Applying lipgloss and false eyelashes, Uys effortlessly becomes Evita Bezuidenhout, who has adjusted comfortably from white supremacy to ANC domination. Later, he hilariously metamorphoses into a rich Jewish matriarch who has adopted a black boy but still complains about the charge on supermarket shopping bags. "Ten years ago," she moans, "we paid for condoms and got the bags free — and now it's vice versa."The great thing about Uys is his moral discrimination. While welcoming democracy and paying tribute to Nelson Mandela and Desmond Tutu, he remains passionately angry about the inertia that allows 600 people a day to die of Aids. He mercilessly mocks Mbeki for his ceaseless travelling and support for Robert Mugabe.

Some say Uys has forsaken his comic role to turn into a crusader. In fact, he is still sharply funny about the monstrosities of the old South Africa, where the rule was "love your neighbour but don't get caught", and the contradictions of the new. When he tried to find his way to an ANC rally in Bloemfontein, he finally recognised it, he says, by the line of Mercedes-Benzes outside. And Uys's attacks on Mbeki's attitude to Aids, especially, prove that satire can be a positive force for good.

Bet you don't get this one

Pieter-Dirk Uys does not describe himself as a comedian. In fact, he dismisses himself as 'a middle-aged drag queen', but he is better known around the world as a prolific playwright, an accomplished comic actor in the vaudeville tradition, and as one of South Africa's most outspoken political agitators and campaigners of the past 20 years.Elections and Erections is a commentary on 10 years of the Rainbow Nation, titled for the two things Uys says were illegal for most of his life.

Now 59, he remains a robust and vigorous stage presence, equally at home with self-contained monologues as improvised banter with the audience.

Most strikingly, by being rooted in compassion rather than cynicism, his polemic strikes more forcefully than that of many politicised entertainers.

Uys may be a regular feature at Nelson Mandela's parties, but he is not so close to the ANC leadership that he is afraid to hold their corruption up to scrutiny and ridicule. Much of his working life is spent taking an educational show about HIV/Aids around township schools.

Elections and Erections is more subtly didactic. Few audience members will appreciate his impersonations of key figures of Botha's apartheid government 20 years ago, but, as Uys pre-emptively observes, very few young South Africans recognise them either; his point is to keep people from forgetting the horrors of the old South Africa. All the same, it is difficult to laugh with conviction if you don't know the original.

Far more stinging are his assaults on the present government of Thabo Mbeki and its ostrich attitude to South Africa's Aids crisis, delivered via a series of larger-than-life characters, both black and white.

Some of his set pieces are chilling: a monologue based on footage from the Truth and Reconciliation Commission, in which a burly Afrikaner unconvincingly apologises for the cameras to a black family whose sons he has murdered; or the sketch in which PW Botha manipulates a ventriloquist's dummy of Mbeki and asks: 'How is it that you are responsible for the deaths of more blacks than I was?' (To which the doll replies: 'I'm not responsible — we let them die by themselves.')This is not light entertainment, but it needs to be said, and no other performer could say it with such flair or conviction.

Three years is a longer than usual gap between London visits for South African satirist Pieter-Dirk Uys; he has also switched venue from the Tricycle to Soho Theatre. In all other respects, though, the strategy remains the same.That may read like condemnation, but in fact it constitutes approval and support: 10 years into true democracy in South Africa, Uys continues both to poke fun at and to make serious criticisms of his country's government.

Some of his impersonations seem adrift from recent events: it's plain that he simply enjoys "doing" the Bothas, P.W. and Pik. Yet it's precisely because of their distance that these figures can comment more sharply on current failings.

One of Uys's great skills is to make clear that his criticisms are offered in a spirit of love and support. The opening line of his show emphasises how remarkable the transformation - the "Pretoriastroika" - has been: "Imagine for a moment where we in South Africa would be tonight if Nelson Mandela had come out of jail angry."

Thankfully, he didn't, and the resulting openness means that Uys can continue to inveigh comically against government corruption ("sometimes ANC also stands for A Nice Cheque") and, most passionately, against the government policy of denying the link between HIV and Aids.

Uys is a master of putting people at ease. Elections And Erections - named after "two things that were illegal for most of my life" - is a tightly scripted show, honed often to epigrammatic precision, but it still feels like a 90-minute chat.

He can simply sit on the stage and don, bit by bit, the make-up and costume of his most famous character, Mrs Evita Bezuidenhout, without detracting from the power of the character.

It's this combination of friendliness and concern that has led him to undertake a number of tours of schools and communities over the years, to increase awareness first of the democratic process and more lately of the realities of HIV and Aids. And at 59, his comic teeth are still sharp enough to draw blood.

If South Africa honoured its actors in the way Japan does, Pieter-Dirk Uys would be a designated national treasure. He is back with his one-man/ woman show, in the raucous atmosphere of the Soho comedy festival. As a liberal, gay Afrikaner, he used comedy and drag to negotiate the horrors of the old South Africa. Now he entertains the new regime. He has a problem, not because he is afraid to satirise, but because he knows things have got better. His familiar cast are with him: Verwoerd and Botha, white women gamely adjusting, affectionate caricatures of Mandela and Tutu. But he hasn’t lost his edge, quoting Afrikaner speeches against "tirirism" in the context of Bush and Blair. He is infuriated by Mbeki’s attitude to Aids. Pointing out that Thabo is an anagram of Botha, he has an Mbeki ventriloquist’s doll sitting on Botha’s knee, discussing whether Aids is more effective than apartheid in getting rid of the poor. As long as Uys continues to "put the mock in democracy", there is hope for us all.