Mr. Uys gave presentations at two Mpilonhle-supported high schools —Silethukukhanya on 7 December and Madwaleni  on 8th December — during his visit.

Both visits focused on giving students the true, unvarnished, in your face knowledge about how to prevent themselves from getting HIV and how to live a healthy and productive life.

Mr Uys speaks the language of students. Despite school holidays having already started, there were over 1000 students at Silethukukhanya and more the 500 at Madwaleni.

Encouragingly, students, parents and teachers from the private schools Felixton (http://www.felixtoncollege.co.za/index.php) and Grantleigh (http://www.grantleigh.co.za/site/default.asp) attended the event at Silethukukhanya School, providing an opportunity for students from exclusively black rural schools and white, colored and Indian students from the private schools to mix. Despite the end of apartheid 15 years ago, there remains too little social interchange – across ethnic and social lines.

And as attested to by the rapt attention — and howls of laughter — he spoke in a language (and in pantomime) that was understood across ethic and social groups. 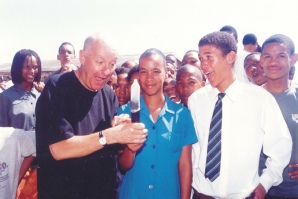