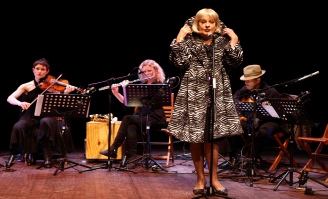 The show is a synthesis of the fictive but very real life of Evita; Pieter-Dirk Uys as artist/satirist/activist — and witness. He was there. We are here now, in the pandemic, in lockdown. Unmasking Evita brings together a potent mix of theatre, TV, film and digital stage. Don’t miss this opportunity to see the iconic Pieter-Dirk Uys on the screen and you will see what I mean.

Delicious entertainment that positively crackles. Long may both Pieter-Dirk and Evita reign!

Looking back over the 40 years Uys and Evita have spent lampooning the political elite in South Africa, you truly appreciate how important freedom of speech is. It’s something we need to treasure, just as we need to treasure two of the country’s most iconic people. So, go and celebrate four decades of fun with them at the Elizabeth Sneddon this week.

***** Evita is incomparable and so is PDU. They feed off each other. It’s thrilling to see them heckle each other on stage. Don’t miss this extraordinary show by the incomparable, legendary Pieter-Dirk Uys –- as himself and as he steps into the skins of real and un-real figures. Do not miss.

It is classic Pieter-Dirk Uys and classic Evita Bezuidenhout: thought-provoking, funny, from the heart and on point with the current popular conversation. A great show with a lot of heart and a lot of laughs.

The comedian’s ingenuity as well as his gift for the unexpected are the chief strengths of #HeTwo: Evita Exposed! With enviable aplomb, he constructs and deconstructs his alter ego before our eyes. What could be more subversive? Or more delightfully thought-provoking? Or more typically PDU?

During this retrospective we see Evita being honoured and adored, The role Uys and Evita have played in our country’s history is indisputable.

In #HeTwo: Evita exposed! Uys reflects on his 38 year-long relationship with Evita, the amazing people she/he has met, and the adventures they’ve had along their journey together.

Reviews of #HeTwo in Johannesburg — August 2019

Watching Uys at work gives you goosebumps. He is a master of the give and take of political nuance, interjecting barbs so bright and sharp that you don’t see them coming, with fierce and earth-shattering repartee that, rather than pulling punches, perfumes them.

Uys entertains with savvy satire, up-to-date observational humour, quick costume changes and spot-on impressions, but if you laugh and then simply leave, you’ve missed the point. #HeTwo clearly displays how far South Africa has moved forward during Uys’ career, but it also illustrates how much work there still remains to do. Get to it.

#HeTwo features the inimitable Pieter-Dirk Uys and his world famous alter-ego Evita Bezudenhout sharing the stage. A great show and a wonderful tribute to one gutsy Lady, created with masterly style. A class act.

Reviews of When in doubt, say darling in London — May 2019

Uys is a compelling and politically-charged master storyteller.  His satire has lost none of its muscularity.

Uys's performance mixes the pointed with the empathetic.

Review of When in doubt, say darling in Cape Town — November/December 2018

Part autobiography, part self-reflection, and part nostalgia:  In between putting on a hat and tie here and a doek there and a fake leopard skin where-ever, Uys just chats to us. Or at least it feels like he chats to us — it’s easy to forget he’s a consummate actor — telling stories about people he’s met, things he’s done.

Reviews of When in doubt, say darling in Durban — November 2018

Uys is an extraordinary performer with a huge heart. ...  He deals with many issues that are confronting communities at all levels in South Africa at the moment. You daren’t lose focus for a minute or you might miss a hilarious aside or sarcastic crack at a politician!

Memories and mirth ... treat yourself, darlings!

“When in Doubt, Say Darling” takes a side swipe at political correctness and reinforces Uys's standing as one of South Africa’s greatest artists. Whilst he is cutting in his portrayal of politicians antics, he is neither myopic, one sided or cruel : he tells it as it is.

Review of When in doubt, say darling in Cape Town — August 2018

**** CONSUMMATE entertainer that he is, Pieter-Dirk Uys has injected new life into tried-and-tested favourites of his repertoire — with an artful blend of the familiar and the fresh. The result is a sly, sweet, satirical farrago .

***  Uys is a capable raconteur with an eventful story that shines a light on social and political history across two continents.  The Echo of a Noise offers a privileged but engaged perspective on apartheid’s near half-century, from a performer who learned early to laugh at his own fears, and is still doing so.

Uys is a captivating anecdotalist who pulls you in with more than mere laughs. The Echo of a Noise

is not just funny and poltical, it is touching too.

Reviews of When in doubt, say darling in Johannesburg — April 2018

An artist who has perfected his craft, Uys is a cultural gem, contributing immeasurably to the South African theatrical landscape.

With his wickedly twinkling eyes and formidably flexible face, Uys is bang up to date.

Strongly recommended. When in doubt, just buy a ticket.

Love him or hate him, watching Uys on a stage is always an experience.  All the more reason to see him live.

Pieter-Dirk Uys does it again — Evita is back in Durban in fine form, pulling no punches!

Uys remains a master of his craft.  He spares no prisoners — everyone and everything gets a shake or a rattle as he rolls out the punches with a sly smile and a twinkle in his eye.

Uys has never been better!

Uys is a master story teller whose characters are always entertaining and at the same time often poignant. This wonderful trip down memory lane is a treasure and definitely a show not to be missed.

Poignant, funny and nostalgic, Pieter Dirk Uys enthralls with The Echo of a Noise.

Pieter-Dirk Uys has a knack for knocking life into perspective.  Long may he remain our moral signpost.

Pieter-Dirk is on top form, a positive breathe of fresh air.

This Tannie will make you think, and think again!

Evita’s’s back in top form, sharp-witted and tenacious as ever, bubbling with barbed lines. ...  Another hilarious foray into our cultural spectrum.

**** Just when you thought that Pieter-Dirk Uys couldn’t get funnier or more topical, or even sharper, along comes this. ... an absolute treasure. The show is brilliant!

Evita  continues playing court jester with as much pizzazz and elegance as she’s done for over twenty years. But today, her bite is even sharper, and her focus more specifically honed.

Evita’s as sharp and perceptive as ever.

With the latest satirical pricks, to the latest political scandals blossoming around the world, Evita Bezuidenhout turns the mirror to South Africa with a subtle reflexivity that will light you up with laughter but break your heart all at the same time.

Uys is a compelling and  dynamic storyteller.

Reviews of The Echo of a Noise in Johannesburg  — March 2017

***** The audience is captured by Uys’s politically-incorrect humour, inexhaustible energy and optimism ... he is the only person who can make you sadly smile at life and our present confusing politics.  Bravo.

Perched on a barstool under a spotlight on an otherwise empty stage, 71-year-old Uys can still hold an audience absolutely mesmerised just by talking. ... The Echo of a Noise is the most honest and wonderful performance I’ve ever seen him give.

Review of The Echo of a Noise in Pietermaritzburg  — February 2017

A unique opportunity to enjoy an intimate performance while learning more about the legendary actor, and of course a night of laughter.  Don’t miss THE ECHO OF A NOISE.

A must-see for anyone interested in South Africa, satire, and a good night out.

Reviews of The Echo of a Noise in Grahamstown  — July 2016

Uys is a smash hit!

In The Echo of a Noise, Uys presents a collection of vignettes drawn from his childhood and early career. The result is a touching and intensely personal meditation wrapped in a bright, light-hearted package, flavoured with the kind of vivid anecdotes and seemingly effortless quips audiences have come to love about him over the years. The production cuts so much deeper than a mere evening’s worth of entertainment.  What a profound 90-minute journey it turns out to be!

***** The Echo of a Noise is an austerely staged tour de force from a man of the theatre capable of seducing his audience with nothing more than a fluent monologue for well over an hour.  Uys take his listeners on a journey to a place somewhere in the hinterland between laughter and tears, in this soul-baring show that has unniversal resonance.

The Echo of a Noise is a soul-baring honest memoir brought to stage by the one who can tell the story best… the one who lived the tale.  Time feels like it is standing still, as you hang onto every word of this skilled story teller.  Truly inspirational!

Uys’s political family drama is biting and relevant. There are moments in the play where the writing strikes a raw nerve and you can feel the collective wincing of the audience. Uys is an equal opportunity satirist and shows no mercy as he wields his pen, and this musical seals his reputation for being brutally honest and fiercely passionate.

**** Pieter-Dirk Uys has outdone himself in lampooning drama that exploits the universal greed for voyeurism, and although Die Van Aardes… was first staged nearly 40 years ago, it has lost none of its relevance between now and then.  Sly, intelligent humour abounds.  Anyone who enjoys intelligent satire will be highly diverted by this show.

Review of An Audience with Pieter-Dirk Eish! in Cape Town  — November 2015

Review of An Audience with Pieter-Dirk Eish! in Johannesburg  — September/October 2015

**** There is simply no one better than Pieter-Dirk Uys for the times we find ourselves in.  He is the only comedian who can still make us laugh at the problems that beset our country, although it may feel as if you are swallowing barbed wire.  So if you are in the doldrums for whatever reason, this brilliant show will console, entertain and invigorate you.

Review of The Echo of a Noise in Grahamstown  — July 2015