PARADISE IS CLOSING DOWN (1977/English)

(*There is a bilingual text to be released on demand)

Paradise is Closing Down is strictly protected by copyright.

The play is savagely bitter and bitingly funny.

The parallel of Tennessee Williams immediately springs to mind. A hard, searing and relentless investigation of (South African) whites through the bottom of a bottle, in which their bitchiness is played out on each other against a background of racial tension ... one feels that his extraordinary method of investigating apartheid by concentrating on the people who are part of the problem rather than part of the solution, is perhaps the most powerful way it could be done.

The subtle, underlying political comment by Uys is ever present ... a beautiful satire.'

Conflicting attitudes on the situation in South Africa are expounded at length — expounded with wit, with bitter humour, often with fury. It is engrossingly entertaining and very very well done. Its message is one that we could ignore at our peril.

As in all the best political writing, the talk is as amusing as it is trenchant and it is delivered convincingly.

There's hope for our English-language theatre after all. Here is an indigenous play that has relevance, wit, elegance and considerable audacity ... a courageous and intelligent play.

Paradise is closing down , currently receiving its American premiere at Syracuse Stage, is a powerful and touching play ... a stunning presentation of South Africa as a paradise which is closing down because of bureaucratic bungling, political blindness, social conflict, powerful forces beyond its borders and the most basic of dramatic and moral themes: human weakness.

Paradise is a cleverly constructed piece of work with a crystal-clear theme running through — that the time bomb ticking under the white 'paradise' is fast running out. 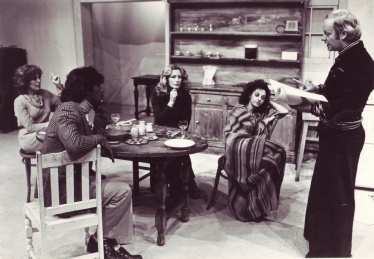