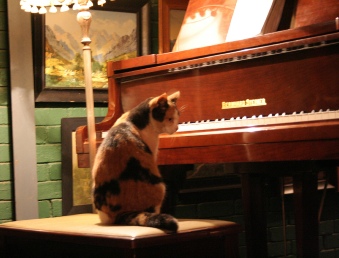 There are piano stories, and there are piano stories.And then there is this chronicle of loss and fulfillment that begins with a Blüthner grand piano built in Germany and shipped to South Africa in 1936, a saga set to end in just a few weeks, when the piano returns to Berlin and a new home at the Jewish Museum there, completing an elegant parabola from Nazi Germany and apartheid South Africa to new eras in both lands.

Perhaps more than the piano itself, though, the story has been a voyage of self-examination for Tessa Uys, a South African concert pianist based in London and the daughter of the German music teacher who first took the piano from Berlin to Cape Town.

As she pored over her mother's documents last year, Ms. Uys (pronounced ace) said, she was also obliged to confront what she had always suspected about herself, a revelation for which her research into the history of her mother and the piano proved to be the key.

Brought up in the Calvinist tradition of the Dutch Reformed Church in South Africa, the daughter of an Afrikaner musician and organist in his local church, she was unaware of one critical fact: her mother, Helga, was Jewish.

But in postwar South Africa run by the white exclusivist National Party, some of whose leaders had sympathized with the Nazis, it was an issue her mother did not discuss widely before her suicide in 1969. She even counseled her daughter to embrace Afrikanerdom rather than Judaism.

''I once said to my mother, 'I wish I had just a little Jewish blood in my veins like two Jewish girls I know','' Ms. Uys, 55, recalled. ''My mother said: 'You don't need Jewish blood. You have Afrikaner blood.' I think she said that to protect me after what she had been through in Germany.''

Now by returning her mother's piano from the thatched family home in Pinelands, a suburb of Cape Town, to the land of its creation, Ms. Uys, said in an interview, she sensed a burden being lifted.

After her mother's death, she said, she played the piano with great pain and difficulty. ''And for my father,'' she added, ''he could not enter the music room. He used to weep to hear it,'' so intense were the memories evoked by the sound of the instrument.

''It was always a source of pain, and that is why, now that the piano has left the house in Cape Town, there is this sense of closure for me and a new life for the piano,'' Ms. Uys said.

On Wednesday morning, in the dark early hours, the piano left Cape Town in the hold of a cargo ship bound for Germany, an 18-day voyage that seems almost prosaic by contrast with a history that at every turn intersects with the 20th century's great transgressions, from the persecution of the Jews to the oppression of South Africa's black majority.

When she played a final concert on the Blüthner for friends invited to her house last month, Ms. Uys concluded a recital of classical pieces with the African hymn ''Nkosi Sikelel' iAfrika,'' or ''God Bless Africa,'' which is synonymous with South Africa's struggle against white minority rule. ''There was not a dry eye,'' she recalled.

And when a local Afrikaans-language newspaper, Die Burger, published an article about it, it did so with a mocked-up photograph of the piano, built in 1913, set against a huge black swastika.

Ms. Uys said that after the piano is restored at the Blüthner factory near Leipzig, she planned to give its first concert in Germany since the 1930's, at the Jewish Museum, which is financing its return and restoration. And she intends to include''Nkosi Sikelel' iAfrika'' in the program. The piano will be installed permanently and played in the museum's concert hall.

Born Helga Bassel in 1908 of Jewish parents, Ms. Uys's mother had studied music in Berlin and bought the piano secondhand in 1930. Around that time she was engaged to be married to a non-Jewish geologist. With Hitler's coming to power in 1933, Bassel converted to Christianity, but her fiancé nonetheless came under pressure from Nazi authorities to break off the engagement.

In 1935 she was told that she no longer qualified for membership in the Reich Music Chamber, an important professional body, and instead had been named as a member of the Reich Association of Non-Aryan Christians.

Although Nazi authorities did not explain the decision, Ms. Uys said, subsequent research by Aubrey Pomerance, the chief archivist at the Jewish Museum in Berlin, established that Bassel had been classified under Nazi regulations as ''fully Jewish,'' and therefore to be persecuted in her profession.

Tipped off by a friend of her former fiancé that much worse was on the way, she and a brother, Gerhard, fled to South Africa in 1936. She took the Blüthner with her. Later, at a concert in Cape Town City Hall, she met Hannes Uys, an Afrikaner accountant and musician who played the organ at the Dutch Reformed Church. They married in 1943.

Their first child, the satirist Pieter-Dirk Uys, was born in 1945. Ms. Uys was born in 1948, just after her parents moved into the two-story thatched house in Pinelands where the piano remained until it was finally dismantled for shipping last month.

In his stage shows, Ms. Uys's brother likes to quip that the discovery of Jewish roots in an Afrikaner family meant ''we are from both chosen peoples.'' But the issue of her mother's faith was not discussed at home, Ms. Uys said.

Ms. Uys moved to London in 1967 to study at the Royal Academy of Music but returned frequently to South Africa, practicing on the Blüthner. After her father died in 1990 the house was rented to tenants, but the music room with its trove of Nazi-era documents was kept locked in her absences. And while she practiced for hours on the piano during her stays in South Africa, she did not choose to scrutinize the documents too closely.

Overcoming apprehension about what she might find, Ms. Uys said, she became engrossed in her mother's papers and took documents with her to Berlin, where research conducted by the Jewish Museum established that her mother had been expelled from the Reich Music Chamber because she was Jewish.

That final disclosure, Ms. Uys said, seemed to lead inexorably to another conclusion: the piano should be returned to Germany. At first the idea seemed daunting but then, she said, became a form of catharsis.

''My life had been so involved with the piano. It had been a focal point of my life,'' she said, so the idea of parting with it seemed ''like a shock, a wonderful shock, and then, a minute later, it seemed like a natural conclusion for the piano as it had come from Berlin.''

''It was almost as if in the music room there was this secret that was never talked about,'' she said. ''Now, through the piano, the secret has been defused.''