THE MERRY WIVES OF ZUMA

The Merry Wives of Zuma is strictly protected by copyright.

Download the text of The Merry Wives of Zuma

The success of MacBeki has inspired yet another PDU assault on the legacy of the greatest English dramatist in history. William Shakespeare’s The Merry Wives of Windsor is not gifted with as obvious a guide track to local political farce as Macbeth was. There the eternal struggle of power versus leadership, of lust versus love, of good versus interesting lent itself well to the drama being played out on our political road to the ANC 2007 Congress in Polokwane. That lead to the in-house coup that said a loud ‘Ta Ta’ to Thabo and the exit of President Mbeki.

The universal enjoyment of MacBeki at the Market Theatre from a rainbow South African audience of all ages and political persuasions made a theatre piece inspired by the many wives of President Jacob Zuma inevitable. But not easy. The Merry Wives of Windsor is a comedy of bad manners including love and marriage, jealousy and revenge, social class and wealth, explored with irony, sexual innuendo, sarcasm and stereotypical views of classes and nationalities.

The text of The Merry Wives of Zuma, not just a local version of  the Shakespeare opus, is grounded in what could be seen as a comedy of bad moves. It was conceived and structured on the long winding road to Mangaung – the December 2012 ANC Congress where, as in Polokwane, the next leader of the ANC is elected. If Jacob Zuma wins a second term and stays the country’s president till 2014, this play will also win a new breath of topicality till that general election. If not, the story can still stand on its feet, as it is not essentially about Jacob Zuma and his four wives.

It is about a town in South Africa like so many towns, adjusting to a new name and local government of the people by the people, but not necessarily for the people. The mayor and his town council manipulate the ups and downs of municipal corruptions and eruptions. There is the intrigue of lust and love, the chess game of marriage and morality, of greedy fads and garish fashions. A rainbow of vibrant emotions, which is also a comedy about serious issues: freedom, opinion, commitment, transparency and truth, all bundled together as political pantomime. 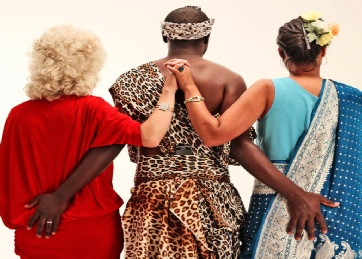