Pieter-Dirk Uys is in tip-top form at the Barnyard Theatre with his production Evita & Co.

The first half is Pieter-Dirk himself, who he describes as a “stage manager who makes his own dresses — and sometimes wears them”. Armed with two carrier bags, he produces a host of characters such as his old-favourites Nowell (“Wake me when it’s o-ver!”) Fine, Bishop Tutu, Evita’s sister Bambi Kellermann and the inevitable PW Botha.

In the second half, his alter-ego, the elegant Evita Bezuidenhout, sails in. Beautifully coiffured in impossibly-high-heels, she puts forward her opinions on a vast range of subjects and interacts with the audience — whether they like it or not! Now running a catering business, she boasts about the peace-making virtues of her bobotie.

The forthcoming elections are providing the kind of stimulus that sends Pieter-Dirk into overdrive. Upbeat and urging everyone to vote sensibly — “choose the tin of beans that gives you the least wind!” — he’s waiting expectantly for a wealth of new material for his shows: “I’m going for the `mock’ in `democracy’ and the `con’ in `reconciliation’!” he smiles with glee.

Razor sharp wit and observation at the ready, he’s at his best skipping merrily with awesome energy through a minefield of outrageously non-PC jibes at presidents, prime ministers and politicians. I am certain that many people in South Africa know more about the running of their country through Pieter-Dirk’s salvos than they do from the media!

The subject of HIV/AIDS — and its prevention — is, as always, his dominant passion. He is tireless in his determination to make sure that every single child understands the notion of safe sex and how to go about it. His recollection of his first sexual experience (“And I was alone at the time”, he quips!) is hilarious.

While jotting down notes during the performance to write this review, I was struck by how many of his pithy one-liners should be preserved for posterity. Imagine how they would brighten up the lives of youngsters studying contemporary South African affairs! I think the time has come — particularly since Pieter-Dirk Uys received a Lifetime Achievement Award at the recently Naledi Awards in Gauteng — to produce a publication along the lines of the Oxford Dictionary of Quotations. How about Darling? ... Skattie?, sub-titled Pieter-Dirk Uys and Evita: What They Said! — sub-sub-titled What Didn’t They Say? 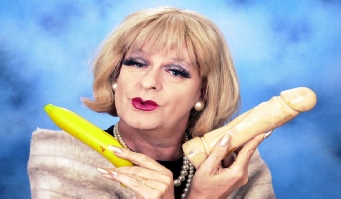