Laughing in black and white

Political comedy in this country died with the downfall of Mrs Thatcher. Bereft of their bete noire, comedians instead turned to surrealistic musings on the import of, say, Thunderbirds or Raleigh Choppers. In South Africa, on the other hand, political comedy is very much alive and kicking. The death of apartheid just gave comics fresh targets to take aim at.

South Africa's leading satirist, who spent years kicking against apartheid pricks, now finds himself attacking those who are post- rationalising their role in it. In his new show at the Tricycle, "Europeans Only" — a reference to the signs that were seen all over public places during the apartheid era — his vehicle of attack is Evita Bezuidenhout. Dripping with the sort of spangles and sparklers that wouldn't have looked out of place on Liberace, she is a woman who, if it ever became an Olympic event, could win a gold medal in self-justification.

After her questionable contribution to the apartheid regime, Evita has reinvented herself as a peace campaigner. She now claims to have clinched the South African peace accord by feeding all sides with a pudding that stuck their teeth together. She is over here to offer Tony Blair the recipe for the Northern Ireland negotiations.

The problem is that Evita's new sheep's clothing keeps slipping to reveal her old wolf's incisors. "We don't want worldly goods like diamonds and gold," she declares with typical grandiosity. "We just want aesthetic things — like cheap servants." Later, Evita casts a worried glance at the servant preparing her food at the back of the stage: "Are you Xhosa? Thank heavens. I thought I had a Zulu behind me with a knife in her hand."

Just before the interval, she implores us to contribute to the charity stall in the foyer "for disadvantaged Afrikaners in Pretoria", before storming out to deal with her stroppy black driver. "I'm very good at negotiating with people like that. I have experience of talking to blacks," she asserts, drawing a pistol from her designer handbag.

But Evita does not just make jokes at the expense of white South Africans. At one point, she says of Nelson Mandela's long imprisonment: "He's very grateful we kept him away from Winnie all those years."

British politicians are not off-limits, either. Evita proudly states that in South Africa: "We've had four years of democracy now — you've just celebrated your first." And she reckons that Britons took to Nelson Mandela because "they hadn't seen a politician they could trust for such a long time".

Uys's show does not always make for a cosy evening out — one particularly chilling section about the treatment of black female anti-apartheid prisoners had me shifting uncomfortably in my seat. But "Europeans Only" reminds us that political comedy doesn't have to be a bludgeoning, blunt broadsword; it can be an implement sharp enough to slice biltong with. 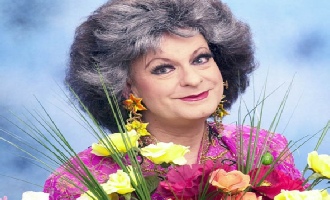