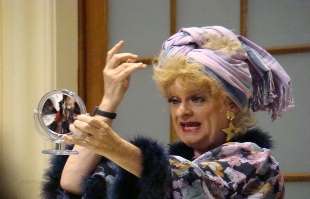 Having already performed an extra show in the afternoon, put on at the last minute to cope with the demand for tickets, Pieter-Dirk Uys proved last night in Desperate First Ladies that his stamina is unfaltering and he’s still in top form.

Appearing in at least ten roles, he never leaves the stage. Chatting amiably while donning makeup where appropriate as well as wigs, hats and glasses, he pulls costumes from an array of beer crates to create the finished look. I was most envious of Nowell Fine’s deep-fringed shawl.

In reference to the show’s title, Uys first appears as a camp dress designer advising his various associates which outfits best suit each of President Zuma’s three wives.

Then as himself, he reminds audience of his gratitude to politicians, “black and white, right and wrong” for having given him a career for the last 38 years. “I don’t pay taxes, I pay royalties,” he quips as he invites audiences to join him in his journey of what makes his “bread and Botha”.

We meet two old favourites, Mrs Petersen, a woman from the Cape Flats, and Nowell Fine who has just been to a school reunion in Canada where most of her former classmates now live. These characters offer frank and often poignant perspectives from a Muslim and a Jewish viewpoint. Nowell (“Wake me when it’s OVER!”) Fine is firmly committed to South Africa: “I’d rather be murdered in my own bed than get up and make it myself,” she stoutly maintains.

Winnie Mandela comes in for much comment as “the mugger of the nation” and Uys confesses that he was sending her up at a major ANC function only to discover that she was sitting right in front of him! Then there’s a chilling reminder of the grasping nature of Grace Mugabe in a parody of “Old MacDonald Has a Farm” as “Grace Mugabe Wants that Farm”.

Then it’s time for Bambi Kellerman, Evita’s estranged sister, who became “one of Europe’s grand horizontals”. In a passionate call for safe sex, she explains the importance of practising how to use a condom and its feminine counterpart so that mistakes can’t happen. Then comes Mother Theresa complete with butterfly wings, talking on a cellphone from heaven. Amongst the fun and nonsense, her message is to live life to the fullest.

The voice of Archbishop Desmond Tutu introduces the legendary Evita Bezuidenhout, looking elegant as always, in a stylish purple coat with a high collar. She introduces us to the baby boy she has now adopted. It’s … Julius Malema!

Uys is fearless, often biting, and invariably hilarious. He turns edutainment into an adult art form. He poses the question that if the Media Protection Bill is passed, would he then not be allowed to continue with his shows on the basis that he’s disclosing state secrets? He is passionate about his country and will do whatever he can to keep its people from all walks of life in a positive frame of mind. As gales of laughter greet many of the jibes he makes at political ignorance and social stupidity, he shrugs: “You couldn’t make it up!”

Pieter-Dirk Uys’ will bring his new show Adapt or Fly to the Elizabeth Sneddon Theatre in March. Book now to avoid disappointment!