REVIEW OF DEKAFFIRNATED IN DURBAN — APRIL 1999

Only Pieter-Dirk Uys could get away with such a title as Dekaffirnated. But that’s the measure of this extraordinary performer. An ability to tackle a subject head-on — particularly a sensitive and volatile one (in this case, a word) — anlayse it, find faults in it, find good points in it, generally finely dissect it like a surgeon and eventually defuse it through logic and humour

Dekaffirnated is running at the Elizabeth Sneddon Theatre until May 9. It opens with a new definition of the word `praise singer’. Out comes balding Pieter-Dirk Uys who dons a frantic black curly wig, a crown of dead leguaans and feathers, art deco sunglasses and a fabric throw to launch into the history of South Africa from the time when the `People of the South’ first set eyes on Jan van Riebeeck.

Interspersed with the various scenes of this highly-controlled and very funny history of South Africa, are reminiscences from Pieter-Dirk Uys’s recent Evita’s Ballot Bus, a voter education project which travelled around the country accompanied by television crews from SABC3 and at least three other major international networks.

“I travelled 10 000km to over 60 venues in a dress for free!” says Pieter-Dirk Uys, whose mood changes instantly when he remembers the thousands of children they encountered on route whose charm and instinct for survival made a major impression on them. Choosing town halls or civic centres for the accessibility, they traversed the country, instructing communities on the finer points of the election system and urging them to vote in the forthcoming elections. Lainsburg left a particularly lasting impression — a devastated landscape, no employment, no hope.

Who funded Evita’s Ballot Bus? Not government, not the IEC, not the department of arts, culture science and technology … simply a five-strong touring team committed to the future of South Africa, doing what they could through the medium they knew best. Entertainment.

Tempest provided the `ballot bus’ in the shape of a combi (“five people in front and Mrs Bezuidenhout in the boot) and, as Pieter-Dirk Uys says — the extraordinary hospitality and kindness we encountered everywhere” meant that a multi-million rand project was achieved on an extremely modest budget.

After interval, we meet the inimitable Mrs Evita Bezuidenhout in full cry, discussing the posters of the various parties and analysing their particular emblems such as a dead mouse (the Minority front — Rajbansi’s wig), three elephants running away (IFP) and a map of Africa, with the sun shining in …. Ghana ?? (PAC). Still “holding onto the old South Africa are the ANC, with an ox waqon wheel and a white hand holding a spear … and the ANC colours are the Springbok colours!”

Pieter-Dirk Uys readily admits that he has a most difficult time coming up — to find a way of impersonating the enigmatic Thabo Mbeki. And he’s going to give the new government a year’s head-start before his beady eye begins to search for future material!

Evita’s Ballot Bus screened on SABC3 every Wednesday at 18h15. 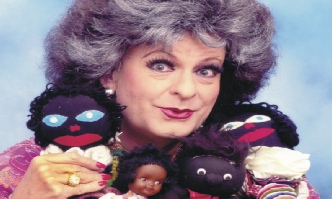