THE RISE AND FALL

OF THE FIRST EMPRESS BONAPARTE

THE RISE AND FALL OF THE FIRST EMPRESS BONAPARTE   (1976/English)

The Rise and Fall of the First Empress Bonaparte is strictly protected by copyright.

The story of Napoleon and Josephine must be as daunting to playwrights as it has been irresistible to film producers....Pieter-Dirk Uys has turned the whole thing inside out and in doing so has shown his sure dramatic sense and knowledge of human motives. It is Josephine who occupies the centre of the drama and how absolutely right this is, for when one looks at Napoleon and all his brothers and sisters during this episode of history, it is Josephine who is the real magnet of their emotions - whether these emotions were love, hatred or envy. She was the light and the rest of them were moths. The fluent dialogue flashes along at an easy pace, the period costumes and musical effects add much to the atmosphere and one brilliant scene gives way to another. I would say it is Pieter-Dirk Uys's best so far.

Pieter-Dirk Uys has imbued his work with a sense of bitchiness which makes it very entertaining at times ... It has the potential of a play which will last the test of time.

Uys's play about Napoleon's first spouse is quite different from anything else he has written — and is quite the most finished ... he treats the portentious stuff of history rather as does an Anouilh or a Shaw. He keeps it lurking, peripherally, in the wings while, on the forestage, he diverts with waggish humour.

This is a thoughtful and enjoyable play...any night you like, Josephine!

Quite different from anything else Pieter-Dirk Uys has written, this study of the marriage of Napoleon and the Creole beauty, Josephine de Beauharnais, and of the bitter internecine feuding between the members of the Bonaparte Family, provides an intelligent and highly entertaining evening. 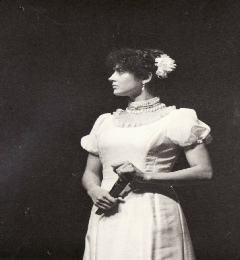