Comedy: There's life in the old Boers yet

Mrs Evita Bezuidenhout, "the most famous white woman in South Africa", swaggers around regally in a splendiferous silver top that even Gary Glitter might think twice about wearing. "How can I be sorry about apartheid?" she asks sniffily. "It had nothing to do with me."In Live from Boerassic Park, Pieter-Dirk Uys, the impish man behind the monstrous woman, has fashioned a show out of that most unfashionable subject for comedians: politics. He must be just about the only stand-up left who is prepared to utter the P-word in public.

But, there again, when you're a South African, it's well nigh impossible to avoid politics. An apolitical act about South Africa would be like a routine on David Mellor that didn't mention toe-sucking or Chelsea strips — unthinkable. Delving around in his dressing-up box, Uys takes aim at the dinosaurs who still walk South Africa three years after the end of apartheid.And he is not short of targets. Putting on a dash of lipstick, a blonde wig, an Alice band and a pout, Uys turns before our very eyes into a Jewish housewife demanding a monument to the work of white liberals like herself during The Struggle. "We stayed here when everybody else fled to London NW3," she moans. "We treated our servants like human beings, in spite of the fact that they behaved like kaffirs."

But black people are not spared his darts, either. Uys marvels at the fact that Winnie Mandela has returned, Lazarus-like, to the political mainstream. "She's bounce-back Winnie," he says, with no little awe, "the bungee-jumping champion of the ANC." He then pulls out a Winnie Mandela souvenir ashtray, which is framed by a mini car-tyre.

While such defiantly non-PC daring is to be applauded, some of Uys's material depends too heavily on an intimate knowledge of South African politics. He even breaks into Afrikaans. Did you know that the South African Health Minister had been implicated in a financial scandal? Did you even know who the South African Health Minister was? No, nor did I. When he broadens his scope, Uys is on more fertile ground. He laughs at the African-American tourists who traipse around his country, behaving like Oprah Winfrey: "They're always in tears." And he warns what would have happened if the Tories had won: "We in South Africa would have had sanctions against the UK. We would have boycotted Earl Grey tea and refused to listen to the Spice Girls." Politics, it seems, need not be a dirty word for comedians. 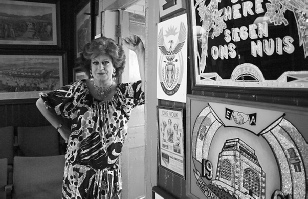