Pieter Dirk is 'Uys' as Bambi

AT 61, Pieter-Dirk Uys has lost none of his chutzpah, freshness or passionate conviction in taking on the harsh issues of our society and making us laugh at them. He brings two productions to this year’s festival. Evita for President gives voice to a presidential tout by South Africa’s most famous lady, who isn’t a woman. Vile und Vunderful is a cabaret exposé of Bambi Kellerman, Evita Bezuidenhout’s younger sister.

It was a black Labrador that set the over-the-top tone on opening night of Vile und Vunderful. She’s the guide dog of one of the show’s audience members. The spectacle of Bambi Kellermann on stage simply riled her. Bambi handled canine heckling in character, splendidly folding it into the lyrics of Vile und Vunderful.

The repertoire of the grim little sister of our nation’s “safe and sound Queen Mother” is delightfully but never emptily risqué, drawing with abandon from a healthy mix of songs from between the world wars Weimar and apartheid Afrikanerdom. The spicy amalgamation of quotes, anecdotes and fairy tales taken from the work and life of Weil, Brecht, Sondheim, Marlene Dietrich and various taboo German, Jewish and gay artistes, combined with Afrikaans kinderliedjies from the FAK songbook like “Bobbejaan klim die berg” and “Wat maak oom Kalie daar?” and even “Daar kom die Alabama” makes for astonishingly dark and brilliant political nuance.

The story goes that like her elder (and fatter) sister, Evita, Bambi was born in Bethlehem. Not wanting to die a virgin in the Orange Free State, she became a wife in 1957. The dashing, much older Joachim von Kellermann it transpired, turned out to be Commandant of the concentration camp Bergen Belsen. Her married life spiralled into a mind-blowing tumult of sex, lies, abuse and debauchery — attesting to Uys’s acronymic representing of WIFE as Washing Ironing Fucking Etc.

The Von Kellermanns went to live in Paraguay in Holocaust exile, where he became Minister for War. His death by strychnine poisoning represented the first time Bambi could laugh — and the box of his ashes she has stashed on her set attests to this with hilarity. Today she runs a wine cellar in Paarl, which doubles as a brothel.

Uys is as comfortably in his stride as political clown as ever he was.

Accompanied by Godfrey Johnson on the piano, who plays seamlessly into the relentlessly tongue-in-cheek tone of the production, Bambi, replete with sequinned purple top and glamorous black skirts, sings of violence and paedophilia, rape, hijacking and corruption without batting a faux eyelash.

But the show is not about empty fripperies. Uys wraps his hard hitting messages about Aids awareness and violence into his off-key humour and singing. “When you’re sitting here and watching this show, what are your children doing?” she quips. “They’re fucking. Your kids are fucking whenever you turn your back”.

Uys’s message never droops to poignancy, but in his rendition of Sondheim’s “Bring in the Clowns” his sentimentality about the two Poggenpoel sisters (Bambi and Evita) presents the work with a bittersweet edge.

Uys is as comfortably in his stride as political clown as ever he was. “We laugh at things we are scared to die of” has become one of his central rubrics. And it works. Labrador or not, the show is a winner. 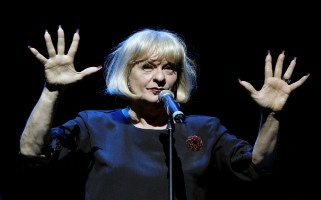