Followers of Pieter-Dirk Uys, one of South Africa’s most creative minds, must surely number in the millions. They will be familiar with his indomitable alter-ego, Evita Bezuidenhout, who is widely acknowledged as the most famous white woman in South Africa. They will also know of the exploits of Evita’s younger sister, Bambi, the blonde Afrikaans meisie who married a Nazi and became a stripper in the fleshpots of Europe.

There’s a DNA history in this quartet somewhere!

With considerable assistance from Pieter-Dirk Uys, Bambi has now revealed the details of her licentious lifestyle which goes back to the days when she and Evita left the Orange Free State to go Overseas in the company of their friend, Mimi, who was on her way to work at the State Opera in Vienna.

Sex is part of Bambi’s make-up and her story is full of professional and personal relationships of varying styles and timeframes as we follow her from her marriage to the abusive ex-Nazi General, Joachim von Kellerman, until she returns to South Africa where she finally sets up one of the most popular wineries in the Cape and becomes free of the spectre of her hated husband.

To quote the press release: Never Too Naked is a “gloves-off, bra-down, knicker-torn, pant-and-groan, blow-by-blow memoir of a sexual existence well-lived. Life with a Capital F… From the dusty lanes of the Orange Free State, via the marzipan cobblestones of Vienna, through the murky boudoir of Nazi nostalgia; stripping in Hamburg, naked in London, pouting in Paris, ending up in Paarl - via Paraguay, Patagonia and hell with a Capital H.”

There is a full photographic history including some of the people who became part of Bambi’s life, such as opera singer Mimi Coertse (the one she went Overseas with), Ava Gardner; Marlene Dietrich; Ernest Hemingway; Paraguay’s dictator General Stroessner — even John F Kennedy and Chris Lombard, to name a few. And who do you think gave the Beatles their early distinctive hairstyles?

To remind readers that there’s no love lost between Bambi and her elder sister, she refers to Evita as “The Vampire.” The narrative is so real that you have to keep reminding yourself that Bambi is a figment of imagination … but she’s certainly very real in this book.

In the real world, 'acting' the eras of Bambi in this clever photoshopped album are her friends in Darling. The book is a brilliant construction and a fascinating read but probably not for those who are uncomfortable with explicit language!

For a frank interview with Evita and Bambi, click here

IF YOU READ ONE BOOK THIS WEEK

AN OUTRAGEOUS, improbable trawl through the back alley gay bars, bedrooms, bordellos and cabaret dives of the latter half of the 20th century as Bambi Kellerman — the younger, sluttish sister of Evita Bezuidenhout — gets on her knees, unzips trouser flies, and takes on the Cold War, Nazis, South American juntas, and apartheid, bumping into Marilyn Monroe, the Beatles, Kurt Weill, Ava Gardner, Marlene Dietrich, Chris Barnard, Nelson Mandela and others along the way. A warped scream beyond camp's wilder shores, but fun. 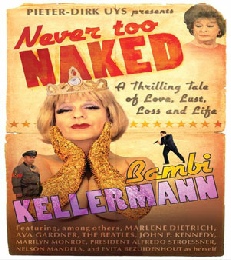