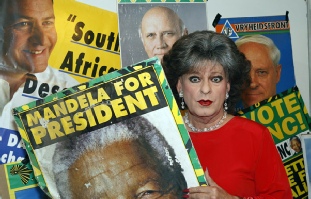 Uys entertains us with a sharply scripted stand-up routine that plays like a crash course in postapartheid South African politics.

A deft quick-change artist and live caricaturist, Uys slips between characters of either gender simply by donning a jacket, scarf, moustache or wig. ... the tone of his show is mild on the surface, but flecked with barbed commentary and crafty throwaway lines. As a humorist who embraces the complexities and contradictions of Desmond Tutu’s Rainbow Nation, he can do no less.

I wish I could market some of the charm of Pieter-Dirk Uys, The magic lies in his gentle delivery, softly spoken, however direct his barbs. He pokes fun at anyone and everyone. He fell foul of the Apartheid regime and is not afraid to criticise their heirs when he finds them lacking, but his wit is placed with such a twinkle of good humour it never feels caustic or unpleasant or bitter. He reminds us of how important humour is to human understanding.

Slipping in and out of his various guises, Uys ... exposes the complacency of privileged whites and skewers the skin deep liberalism of old school Afrikaners who have trimmed their views to fit the new dispensation.

Uys balances his portrayal of present day South Africa with chilling reminders of the evils of apartheid, [and] conveys much more when he delivers the simple but telling personal anecdotes that show off his skills as a storyteller and give glimpses of hope for the rainbow nation’s future.

Reviews of Evita for President in South Africa  —  2007

Few political observers are able to offer as keen, as hilarious and as transformative a view of the political landscape and its personalities as Uys. Although the architecture of his one-person shows has remained more or less the same since he first conjured Evita to life in Adapt or Dye in 1982, the content is always as fresh as today's headlines and as vital as the political air we breathe. EVITA FOR PRESIDENT is vintage Uys - with several new and wonderful characters who make an appearance. If your political compass needs resetting, don't miss it.

(TRANSLATION: The humour is immediate and the newspaper-headlines of the day are already part of the evening performance. Within seconds Uys changes persona. His radar is finely tuned onto our society and can translate exactly and with humour. In EVITA FOR PRESIDENT there is no fear of calling a spade a spade. It is a call to add your voice to. Isn't that what democracy is all about? In EVITA FOR PRESIDENT the proof is obvious — humour is the best traditional weapon.)

Satirist Pieter-Dirk Uys is on scintillating form again, taking the mickey out of everything in socio-political sight. His withering commentary on a number of issues is more abrasive than ever. His sharp wit, applied with scorn and perfect timing, comes to the fore time and time again. He is indeed a skillful performer. Evita for President? Sigh...if only...

In "Evita for President" we see an ever-mordant Pieter-Dirk Uys coming up with a very pertinent reminder that the process by which a new president is decided upon is itself hardly democratic, with only ANC delegates and branches being able to elect and nominate candidates for the top job. Pieter-Dirk Uys taps into our anxieties about this process and its outcome, but in this show he doesn’t shy away from showing how his stereotypical icons crumble under the pressure of taking a dignified and morally upright stance in the face of all that is wrong and unjust in our society.

Above all, Pieter-Dirk Uys the artist triumphs. He continues to astound in his seemingly effortless transitions from one character to the next, and making himself up as he spills out one devastating one-liner after another. Tannie Evita comes in at the end, and with all the sensitivity of linoleum, but she still has her relevance. The question of relevance has everything to do with the kind of society Pieter-Dirk Uys reflects in his shows and the power relationships that operate within it.

Uys's performance is skilled and seamless. He shows that humour doesn't disguise the problems in our country, it highlights them as the ultimate weapon of "mass distraction". Even if you're not interested in the politics, the show is well worth the visit, if only to see one of the finest performers in our country "put the 'mock' into democracy".

The satire is harsh, uncomfortable at times, but supremely entertaining. It offers a hilarious, nuanced take on our politics, our history and the many ineffectual buffoons — such as former National Party foreign minister Pik Botha — who tried to lead us.

I urge Sowetan readers to do themselves a favour and go and see this show.

No cows are too sacred to slaughter, no fear too strong to face. Fear has always been his target, Uys says. And it works. Uys's painting of our grossness in broad brush strokes brings the truths home. With stunning versatility, Uys switches character, acting out the equivalent of the cartoonist's caricature.

Just as Uys has created his own style of theatre and has perfected a winning formula, so has he shown his uncanny knack of always being fresh and exciting. Evita may be the focus of the show, but she is not the star. Instead we meet a number of characters drawn from the past and present political spheres as well as, importantly, characters that reflect the very real people who provide commentary on the puzzling events in the realm of South African politics.

The result is a perfect balance between reminding us of the insanity of the past and throwing a spotlight on the madness of the present. And there’s plenty of madness.

Uys goes to great lengths to remind us of the need to laugh at this madness that surrounds us, especially at the frightening foibles of our country’s executive; but know this: he clearly doesn’t find a lot of it funny. That’s typically Pieter Dirk Uys. Simmering below the entertainment is an actor, playwright, political satirist and social commentator who is clearly bitterly unhappy at the blatant mismanagement that has left its scars on the people of this country. It is this subtle venom that makes the show so brilliantly succinct and powerful.

Evita for President is one of Pieter Dirk Uys’ best works. Go and see it!

‘Evita for President’ is worth watching just to marvel at Uys’ amazing ability to find humour in the political landscape of South Africa. ... His comic genius finds its most effective release in the political arena, and as a political satirist, Uys is without a doubt on top of his game. ... It’s probably the most politically incorrect play you’ve ever seen, where nothing is sacred.

A white Afrikaans man in a dress for President, you laugh? Well, laugh you might, but — hey — would it be such a bad idea? Arguably no-one is more passionate about the country; no-one has a better command of who’s who, and certainly no-one is more fearlessly vocal in putting her money where her mouth is. ... But that’s Pieter-Dirk Uys. If he feels strongly about something and can solve it/make it better/publicise it, he’ll find a way of contributing his considerable energies. You couldn’t wish for better or more enlightening entertainment. Evita’s got my vote!

Uys still relentlessly pursues whole pastures of sacred cows. ... Each of these caricatures is distinctly refined and I admired the performer's whole-hearted embrace of each figure, right down to the smallest movements of the joints in his fingers. But I think that where Uys really hits home is with his characterisation of ordinary people. The rich and powerful whom he presents are little more than sketches, but with his ordinary women — Mrs Patel, Mrs Petersen and Nowell Fine — he manages to create real characters.

Perhaps Uys is at his most heartfelt when addressing issues of poverty, and it is here that one catches a glimpse of his compassionate and generous nature. Besides dispelling fears by speaking boldly about issues which many are too afraid to address, Uys is also a true humanitarian.

It takes a lot of gut and humour to get through Evita for President as it takes a stab at religion, politics, race and everything in between. There were many moments when the audience gasped as what [Uys] was saying, or insinuating. Each of his characters has been carefully selected, as they all represent our country politically and economically in some way. Uys uses the stage to explore our past, but does so in a contemporary manner.... Ultimately, the performance takes a dig at all our political situations, and how Evita would make a good candidate for presidency. Although it is all a joke, most of what is said in the performance is true, as it has happened in our country.