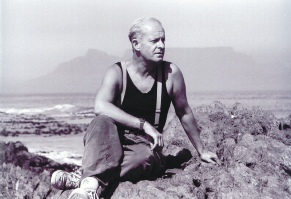 Pieter-Dirk Uys was born in Cape Town in 1945 and has been in the theatre since the mid-1960s. Closely associated with both the Space Theatre in Cape Town and Johannesburg's Market Theatre during the 1970s and 1980s, he has written and performed more than 20 plays and over 30 revues and one-man shows throughout South Africa and abroad.

His plays Paradise is Closing Down, Panorama, God's Forgotten, Auditioning Angels, Faces in the Wall and Just Like Home have been performed internationally, and his one-man shows Adapt or Dye, One Man One Volt, You ANC Nothing Yet, Truth Omissions, Live from Boerassic Park, Dekaffirnated, Foreign Aids, Evita for President, Elections & Erections, Desperate First Ladies, An Audience with Pieter-Dirk Uys, The Echo of a Noise and When in doubt, say darling have been presented in the United Kingdom, Denmark, Germany, Holland, Switzerland, Australia, the USA and Canada.  His performance of Foreign Aids at La Mama received the Obie Award in New York in 2004.

Pieter-Dirk Uys has been doing this sort of thing for so long that people now refer to it as a career.  Officially unemployed since the early 1970s, he writes, directs, acts, produces and does everything else, including the making of dresses and the wearing of them!  Having survived the mediocrity of apartheid kultuur, it is his therapy and his joy to expose the bones of that dinosaur for the entertainment of democratic audiences worldwide.  He is delighted to still have a government that on a daily basis writes his best material!

Most of Uys’s satirical work was available in South Africa on video (and still is, on DVD) and so, in spite of government censorship during apartheid, he built up a very large multiracial audience.  Members of the present democratic parliament remember seeing his videos while in exile and in prison!  He has been seen on SABC since the late 1970s in a variety of programmes, including An Uys up my Sleeve (1985); One Man One Volt, which was to be screened prior to the 1994 election, but was held back for ten months; You ANC Nothing Yet (1996); and The Great Comedy Trek (2004).  The series Going Down Gorgeous, featuring Nowell Fine in a saga from 1976 to 2004, was screened towards the end of the last century.  Foreign Aids has been broadcast for Aids Day (1 December), and in 2007 SABC2 presented Dinner with the President, a 13-part talk show hosted by Evita Bezuidenhout.  Ten of Uys’s shows are currently available on DVD.

A prolific writer in many genres, Uys’s novel Trekking to Teema was South Africa’s first internet book in 2000, before being published in tree-format.  His second novel, Panorama, was published by Missing Ink in 2013.  He has also written Evita Bezuidenhout’s biography, A Part Hate A Part Love (1994), as well as a book based on his12-part 1994 MNET television series, Funigalore, in which Evita Bezuidenhout interviewed the new democratic government’s leaders, including Nelson Mandela. His (and Evita’s) cookbook, Evita’s Kossie Sikelela (2010), became a bestseller and was followed in 2012 by a second cookbook, Evita’s Bossie Sikelela. Uys has written three memoirs, Elections and Erections (2003) Between the Devil and the Deep (2005) and The Echo of a Noise/Weerklink van ‘n Wanklank (2018), as well as the ‘autobiography’ of Evita’s younger sister, Bambi Kellermann, Never too Naked (2011).

Since 2000 Pieter-Dirk Uys has been travelling around South Africa with a free AIDS-awareness entertainment called For Facts Sake!, visiting over 1.5 million school children, as well as prisons and reformatories, He has also released a corporate AIDS-information video, Having Sex with Pieter-Dirk Uys, as well as the family-friendly video, Survival Aids, and Just a Small Prick!, addressing the fears surrounding testing for HIV.

In 2009, Uys directed Macbeki, his first new play since 2003, at the Market Theatre, Johannesburg. His next play, The Merry Wives of Zuma, was premiered in 2012, and his most recent play, African Times, in 2015.

In 2015, Pieter-Dirk Uys turned 70.  To celebrate, a new collection of his Afrikaans plays, Stukke Teater, was published by Human & Rousseau, and he was chosen as the National Arts Festival’s first Arts Icon.  Uys performed three special solo shows during the 2015 festival: A Part Hate A Part Love (featuring Evita Bezuidenhout); Never Too Naked (featuring Bambi Kellermann); and The Echo of a Noise.  In honour of Evita Bezuidenhout’s 80th birthday, Kyknet presented Kyknet vir Tannie, produced by Evita’s former secretary, Bokkie Bam (Lizz Meiring), with greetings from Evita’s far-flung family and interviews hosted by Coenie de Villiers. Uys is the subject of two award-winning documentaries.  The first, Darling!  The Pieter-Dirk Uys Story (2007) (https://pdudarlingmovie.wordpress.com/), directed by New Zealander Julian Shaw, is about Uys’s Aids-awareness presentations. The second, Nobody’s Died Laughing: A Journey with Pieter-Dirk Uys (2016), directed by Willem Oelofsen, follows the peripatetic Uys for most of 2015.

The 2020 pandemic shuttered theatres worldwide, including Evita se Perron, Uys’s cabaret theatre and restaurant in Darling. Happily, the venue has been bought by the owners of Darling Sweet, who have made it the home of their new bakery, Swartland Kitchen, as well as a new Perron coffee shop and deli. The Perron is now also the home of Darling’s beloved bookshop, Book League, and a new fine dining restaurant, Kossie Sikelela, while retaining such unique Perron features as the museum/nauseum collection of apartheid-era artifacts and the satirical garden, Boerassic Park. There are currently also three Perron cats in residence. During the pandemic, Uys presented live-stream shows from Cape Town’s Penny Lane Studios in July, August and September 2020. He will be returning to the Perron stage once it is safe to reopen performance venues.