Review of An Audience with Pieter-Dirk Eish! in Cape Town  — November 2015

Review of An Audience with Pieter-Dirk Eish! in Johannesburg  — September/October 2015

**** There is simply no one better than Pieter-Dirk Uys for the times we find ourselves in.  He is the only comedian who can still make us laugh at the problems that beset our country, although it may feel as if you are swallowing barbed wire.  So if you are in the doldrums for whatever reason, this brilliant show will console, entertain and invigorate you.

Reviews of An Audience with Pieter-Dirk Eish! in Cape Town  — February/March 2015

Effortlessly incorporating references to recent news events, parliamentary skylarking and even a bit of sexual innuendo into his dialogue, it is Uys' infectious optimism that ultimately trumps all.  An Audience with Pieter-Dirk Eish is already the most sought-after invitation in town.  Do anything you must to secure your seat.

Uys has not lost his bite, nor his enthusiasm for our homeland. His ability to poke fun while remaining upbeat is inspiring.

Uys is an incredible transformative actor, fully inhabiting the characters he presents to become unrecognisable under even the most cursory costume.

When Pieter-Dirk Uys gets on stage, no one and nothing is safe. Through his incisive impressions of well-known figures [and] his mimicking of ordinary South Africans, his sharp satire is as pointedly political as ever.  And his frank treatment of white Afrikaner guilt as well as the contradictions of today’s South Africa is cathartic and much needed.

Reviews of An Audience with Pieter-Dirk Eish! in Johannesburg  —  May 2013

Uys is brilliantly back on top form.  There are plenty of laughs, but often it’s not comedy as much as very powerful storytelling, and it's all the richer for that.

**** Pieter-Dirk Uys clearly has his finger on the pulse of the nation.  Like a precious red wine, Uys is maturing magnificently. He is as sharp, searing and to the point as he always was but add to that a sensibility that hits the sweet spot in ways that make you both laugh and cry.

Uys is as clever and entertaining as ever.

An Audience With Pieter-Dirk Eish! proves the satirist, commentator and comedian still has it in spades. You will laugh, but you’ll also be moved and challenged.

Reviews of An Audience with Pieter-Dirk Eish! in Durban — February/March 2013

***** Every laugh is truly South African. Uys will keep you rolling in the aisles with his humour, but the show is also a thought-provoking one.

Uys’s pick-a-box show is unpredictable and brilliant ... a reminder of just how important Uys’s role as a thorn in the side of those in power has been over the past 45 years and how important it still is.

Veteran social commentator and satirist supreme holds the audience in the palms of his hands from start to finish in his latest offering, An Audience with Pieter-Dirk EISH! The evening’s entertainment depends on choices made by members of the audience who ‘pick a box’ and voila! out pops a character, a skit, a piece of burning satire, a joke. Only Uys could carry off such a coup with such aplomb and graciousness!

An Audience with Pieter-Dirk Eish  [is] topical, relevant and hilariously funny. ... In a celebration of free speech, Pieter-Dirk Uys helps us laugh at our sacred cows, our uncertain future and to embrace our young democracy. At the same time he voices real concern for issues such as HIV AIDs, threats to freedom of expression and the Protection of State Information Bill.

A truly South African star, Pieter Dirk Uys continues to expose on stage the colourful South African characters we love to hate and as always, he gets away with it! He is nothing short of brilliant!

Reviews of An Audience with Pieter-Dirk Eish! in Cape Town — October/November  2012

Eish! What a ride. Delicious conspiracy of positive thoughts. There are sly jokes about contemporary politicians and barbed quips fly quick and fast. The whole show is like that: funny until you realise he is not really making a joke because he is trying to get you to laugh at what you don't take seriously enough. Uys manages to imbue his performance with a positive message without being corny. He does it with his usual aplomb.

Uys's love of the theatre is contagious. His clarion call to guard democracy with vigour is delivered in sharp sound bytes. Uys is as rich a source as any of relevant commentary on both the historical and current political situation - a timely reminder of the relevance of theatre, and satire in particular, to the political and social fabric of society.

Intimate, thought-provoking and spellbinding. Pieter-Dirk Uys's raw and brutally honest opinions give us the freedom to laugh at ourselves, but also force us to take a good, long look at what is happening around us.

See a national treasure perform and experience a history lesson that is funny, uplifting and sad at different times - always conveyed with honesty, tongue in cheek humour and a twinkle in the eye.

Take a walk on the Dirkside. Humour and a bit of introspection is a great force.

Review of An Audience with Pieter-Dirk Eish! in Grahamstown — July 2012

An Audience with Pieter-Dirk Eish! was funny and camp the whole way through — and it was also deadly serious. 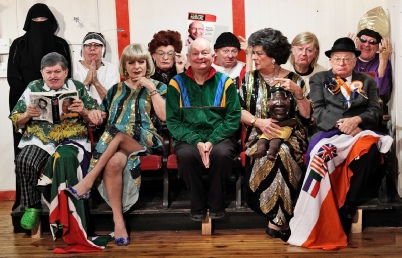