50 Shades of Bambi is a bittersweet fictional musical memoir of one of Uys’s alter egos, former stripper Bambi Kellermann, which also pokes fun at verkrampte attitudes to sex and sexuality. Cocking a snook at such poppycock, Bambi/Uys cheekily gives traditional volksliedjies such as Hier’s Ek Weer and Hoe Ry die Boere Sit-Sit-So a subversive twist, in between Kurt Weill standards. Several shades away from ordinary, the bold and bodacious Bambi is anything but grey — entertainment with a risqué edge.

**** Bambi gets down low and dirty, speaks her mind to show how it’s done and says with pride that she’s experienced everything — twice. But Bambi is no ordinary tannie. She constantly catches you off guard with her sharp wit which turns a mild-mannered phrase into something completely different. There’s silly and there’s serious and Bambi does both as she talks about condoms and vaginas, female contraception and the apartheid between children and parents. “It’s back,” says Bambi sadly. What you’re seeing is not only Fifty Shades of Bambi but rather Fifty Shades of PDU, an artist who knows how to speak to the hearts of his audience. And this time he does it in both stilettos and song.

Satirist Pieter-Dirk’s Uys’ alter ego, Bambi Kellermann, the sister of Evita Bezuidenhout, is back in the full glare of the spotlight, blasting off about the country, sexual matters of a very sensitive nature, drugs, rock ‘n roll and anything else that catches her eye. Dressed to the hilt, with a sharp blonde wig and in a full-length black costume, Bambi holds court for an hour-and-a half, dispensing gems of wisdom and her own special take on South Africa. It’s different, but a “story” that certainly makes one think — especially her insistence that we all make a difference at the elections in May.

50 Shades of Bambi is recommended for anyone who believes in freedom of expression and the right to choose what is best for them. Pieter-Dirk Uys had audiences wrapped up in laughter and falling off their seats.

50 Shades of Bambi will give you pause for thought as well as hearty laughs.  Uys is at the top of his satirical game.

In his latest production, 50 Shades of Bambi, Pieter-Dirk Uys, singing husky tales in cabaret as Bambi Kellermann,  shows once again why he still holds centre stage in South Africa’s entertainment industry. ... Under her bottle blond hair and batting eyelashes, there is a razor sharp wit as Bambi takes us on a whirlwind tour through her life. “Through hot times and vrot times, high times and low times” we get a fascinating glimpse into the life of a Vrystaat girl turned European sex worker and stripper, with some wise lessons and clever comments between the lines.

50 SHADES OF BAMBI is a reflection of a life well lived as the forthright Bambi looks back on her life as well as at some of our current social and political trends in her own special way.  As Bambi, Uys tempers the character's crude sarcasm with a personable and intimate relationship with the audience.  Although the audience can all see Uys's eyes twinkling behind his adopted persona, Bambi comes across as a real person, fully-fleshed out and never falling into the dangerous traps of stereotype and caricature.

*** Uys artlessly mixes political satire and [Bambi’s] personal anecdotes as he navigates an evening that demands vocal performance as well a theatrical versatility. 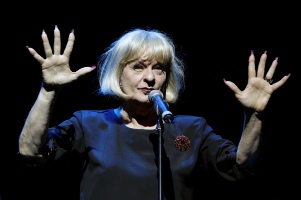