OPINION: We want to know who has fingers in the pie

Let Zuma stay where he is, says Evita Bezuidenhout. At least we know where to find him and who to blame when more facts are leaked from the steaming chamber pot of internal politics.

I have always been against a secret ballot. And yet I am for a secret vote.

The latter is your choice for future leadership, and the former is your support for a corrupt past.

Don’t we today all want to see who is determined to protect the present state of leadership and so know who carries that secret Saxonwold Shebeen tattoo?

When adults start throwing koeksisters at each other in my Luthuli House kitchen, I feel closer to Trump’s chaotic White House than to the diminishing legacy of Albert Luthuli and Oliver Tambo.

We have all been very aware of the tensions surrounding the position of President Jacob Zuma.

There have been ample headlines during the past few months to expose ANC rifts to the public domain. The various oppositions, official or disruptive, seem to have forgotten their role as democratic alternatives to the stagnant government and tend to carelessly throw their canteen sausage rolls across the floor of the National Assembly at the stony-faced majority party who don’t eat cheap snacks any more.

I keep on reminding my white colleagues in politics and the media: this is the time for us blankes to shut up.

The more indignation and fury that pours forth from our mouths against the present state capture, the more will the black majority unite against “white monopoly moans”.

There are more than enough clever and calm black cadres who are quite capable of standing their ground against those thieving comrade-magpies, who each don’t even bother to disguise their serious morality bypass.

At least we now know who they are and every noise they make to protect their buried treasures just confirms the rumours, because they protest their innocence too much.

A secret ballot in the National Assembly on the future of Zuma will result in chaos.

By now Speaker Baleka Mbete has received my series of tweets explaining to her carefully what a secret ballot entails. As with general elections, where every voter is assured that their choice will remain secret, the representatives of the people in Parliament will also enjoy that right of anonymity.

Which means the citizens and taxpayers of our country will never know who voted against the presidency of Mshowerlozi. But more disappointingly, we won’t know who voted to retain his services.

We want to know who has their finger in his pie!

The major argument during the koeksister skirmishes in my kitchen was from those cadres who said they wanted to know who was supporting the state capture and corruption, so that these petty thieves could and would soon be on public trial for corruption. A secret ballot will erase any ID from that list, still regarded by too many as fake news.

I also pointed out to comrade Mbete, hinting at her ambitions as a future presidential candidate of the party, that if she agrees to a secret ballot and it succeeds and the president is fired, she would have to take over as acting president and face the wrath of the Zumanatics in Parliament.

They will blame her for the end of their one-party ANC rule. No new hats or a mediocre “acting” talent in the Speaker’s chair will divert their fury.

I really hope there will be no secret ballot in Parliament today. Let Zuma stay where he is. At least we know where to find him and who to blame when more facts are leaked from the steaming chamber pot of internal politics. There are enough good people in the party to sort this mess out in the fullness of time. Yes, the ANC is very old, I grant you, and works very slowly.

The ANC will investigate every cul-de-sac before they find the freeway. But that open road will be available to all at the ANC congress in December - a wide straight boulevard with white lines and yellow lines and rules and structures.

All the boring, undramatic ways to peacefully and democratically remove those who have outlived their usefulness and pack them off to Dubai via a pack-up in Nkandla.

A successful secret ballot means that Zuma and his entire cabinet would have to resign.

That includes some very guilty crooked cheats and liars who will not pack their boxes and meekly leave Luthuli House as the condemned did in Wall Street.

Everyone has a gun, a reputation and a bank account to protect. And if they can’t bribe an accuser into silence, they might just pull the trigger. And it won’t be restricted to members of a Saxonwold kleptocracy. Please don’t unleash the tiger in the Afrikaner, to quote former crocodile-in-chief PW Botha.

That small band of broeders — overweight and white, furious and marginalised — just itching to explode, will not sit quietly at the edge of society and watch the rainbow toilet roll implode into a soggy mess of madness.

They will load, aim and fire. And Afrikaners still know how to hit a target. Without an elected government and a Mad Hatter acting the part of Numero Uno, fear could unleash an uncivil war.

So I would suggest that the ANC rather make a deal with Zuma and respectfully inform him: “Mr President, if you walk into Parliament on August 8 with your charming smile and announce that you will resign with immediate effect, you will have full amnesty.

You will enjoy a dignified pardon, without having to give up any of the ill-gotten gains that other bad people gathered and stored in your family’s name.”

What is our loss of a few billion rand compared to the chaos and confusion that a continued Zuma presidency — his and hers — would unleash? The motion of no confidence is not even a beginning. It must be the end, because then the hard work starts.

A new broom to sweep clean, a new era of trust to be earned, a new breath of fresh air to help the nation exhale. My milk tarts are ready. The malva pudding stands prepared.

Whatever happens in that live reality show direct from the National Assembly, at least the inmates of the asylum will know that after all is secretly said and done (or not), Tannie Evita’s high tea will be served. Adult behaviour will be richly rewarded.

* Evita Bezuidenhout is a member of the ANC but writes here in her personal capacity. 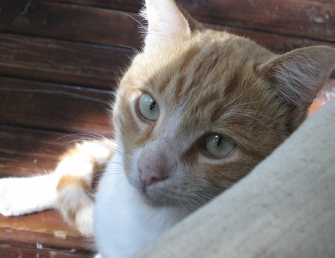