1. Judging solely by the cover of the Festival programme, Evita hasn’t aged very well — it’s not the most flattering portrait, even though we all know Evita is still an extremely beautiful woman. So, if it’s not too impolite to ask, when was the first time you or Evita came to the Festival? What productions did you bring?

The cover of the programme was a hijack — it was not submitted to Mrs Bezuidenhout or to her office (me). There are so many better images that she would have sent. Besides, the figure behind her, reputed to be Chester Missing, looks like Jacob Zuma in a misty-eyed rub-up against her. Why didn’t they ask Brett Murray for a portrait? The first time Evita came to Grahamstown was in Beyond the Rubicon in 1986. In that show her sketch was set in the future in a black-ruled SA where Afrikaners had pass books and lived in ghettos, like Piet Retief Dorp. (Guess where that was?)

2. The first time Nick saw you in the flesh was when Evita came to his high school in Durban in 2004. She told hundreds of children that day that she wasn’t going to “talk about the birds and the bees — because how does a bird fuck a bee?” Would you say your work, as we look back on it this Festival, is reliant on this attitude of just getting to the point?

No, she would never have used that word. That’s why Evita still works: she has no sense of humour or irony and — also being a good Calvinist verkrampte tannie — would never swear. I said those words and I still do: it’s important to focus the learners on where the minefield is. I have always tried to be as topical and immediate as possible, knowing that many of my audience isn’t, and probably won’t understand the reference until they see it in a paper or on TV. But old news is no news. I keep to the balance of 49% anger vs 51% entertainment.

3. How much of your enduring relevance, would you say, is down to the fact that things in our country are about as strange and bizarre post- 1994 as they were pre-1994?

Not as strange or bizarre, but also strange and bizarre in its own way. Democracy will never be perfect because everyone’s fingerprints are on the silver chalice of freedom. So it will always be uphill and wobbly. The past was a battlefield of murder and intrigue. Today we just have a corrupt, inept and careless government. Welcome to the Club. Most of the world has one too. It now depends on the people to provide a lead the government can follow.

4. The poster for your new play, African Times, cheekily features the statue of Nelson Mandela being removed from its place outside the Union Buildings — not craned up as Cecil John Rhodes was when he taken away from UCT, but more being torn down à la Saddam Hussein in Baghdad. There’s no doubting your admiration for Madiba, obviously, but Evita also recently wrote of her exasperation, in Prufrock magazine, of everything being named after our great statesman. Where does reverence end and obsession begin, do you think?

Nelson Mandela was the first person to laugh at my send-ups of him and my criticism of ANC policy. The poster image reflects the fact that once the statues are removed, the people will go and once the people are gone, new statues will arise. In my play African Times, which is set in a tense and unwelcome future, each time the TV was switched on, it was about Madiba or his voice. Very like today: there is nothing worth celebrating other than the negative.

5. Speaking of Madiba, it’s notable that you were never banned during apartheid. Would you consider that a success or a failure? Is being banned a badge of honor nowadays?

My plays were banned. I am grateful because it forced me to cross that line and put on a frock and cock a snook at my fear. My father’s cousin was Dr DF Malan, the first NP Prime Minister (1948+), and so I suppose that kept me safe. In Germany, when they ask how do I fit in to the SA anti-apartheid movement, I say I was the cousin of Eva Braun!

6. Related, what is the greatest compliment that either you or Evita has received from a politician?

Pik Botha, who believes that they are still having an affair: “Evita, my skat, jy lyk so pragtig.” Nelson Mandela: “Evita, you look so beautiful!” And the Los Angeles Times: “Uys dons false eyelashes and presidents listen.”

7. If Sean is not mistaken, Albie Sachs once said something like — and he paraphrases — “Now that the Struggle is over, artists can now just paint flowers.” Since you’ve moved to Darling, verdant land of blossoms, have you considered just writing a play about flower-sellers?

No, I will find time to write about politicians like dear old Albie Sachs who air such sentimental hopes that art will not reflect corruption and carelessness. Artists must always paint the dying flower as well as the plastic one. Reflect the world as it is — and I would add — with humour. Humour is the only real true weapon of mass distraction. 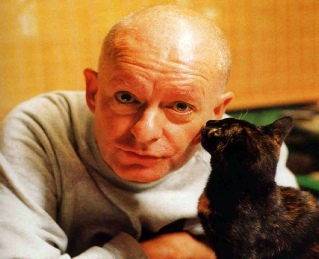