For around R14-million less than Sarafina! 2, Pieter-Dirk Uys has created an informative and entertaining stage work about HIV/AIDS whose appeal is heartbreaking.

Uys deploys all his craft and art in For Fact's Sake, a 90-minute tour through Sex SA that will have you laughing at yourselves and lamenting for the country's youth. Indeed, the worst case scenario of the STD Holocaust that Uys sketches reads as an anthem for doomed youth. South Africa has a great future, says Uys, if only we can keep its children alive to see it and make it.

That is a gut-wrenching, mind-twisting notion. And it becomes ever more poignant throughout the show as Uys recounts his dealings with children for whom the future is not only imperfect but impossible. There is the indomitable youngster who, cottoning on that Evita Bezuidenhout is not a woman, spent the rest of the afternoon wagging a finger at Uys. That child is dead.

Then there are the kids who dance along eagerly, stop when desperately out of breath and then start up again as soon as they have a gasp of air in their lungs.

This country will very soon have 2-million Nkosi Johnsons, Uys reminds us.

How to stop this haemorrhaging? Talk about sex. Parents, teach your children well. Thabo Mbeki, stop conducting the Aids dissidents' band. Boys and men, lock yourself in your bedrooms with the lights on and practise using that condom. Politicians, act against rape. Laugh at the fear of dying of love.

As Uys points out early in the show, laughter is what minimised the apartheid monster and its architects and minions. We were scared, we laughed and the horror grew smaller. A little smaller, but smaller nonetheless.

The buffoons of the past were skewered for old times' sake, but this is a farewell to Verwoerd, PW, Pik and Piet Koornhof: Uys doesn't want to dwell on the past, he wants to be a midwife to the future and its golden potential. Still, he reminds us chillingly that figures of fun though they were and are, those NP icons killed people at the stroke of a pen, the wagging of a finger, the licking of a lip.

The Nats wrote his scripts for him; the ANC government is fast catching up. The 20th century, muses Uys, was about fighting for freedom but getting only democracy. And, he confesses, he always hears the word as deMOCracy; so too with reCONciliation.

Uys will always be a watchdog, directing his satirical arrows at those high figures who hold, it seems, untrammelled power. Of those currently holding the reins and wielding the whips, Mbeki is excoriated for his stand oh HIV/Aids.

Hard-hitting and tender, considered and passionately proselytising, grateful to have escaped the past and mindful of the future, For Fact's Sake is a one-man band whose song about Aids strikes scores of chords. It is a public health service, an altruistic act by an artist prepared to put his money, time and artistry where his mouth is.with it. 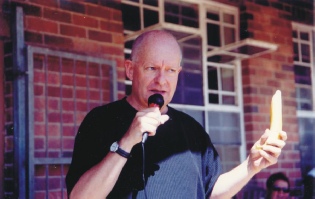